THROUGH SPACE AND TIME TO THE GALAXY DINER ON ROUTE 66 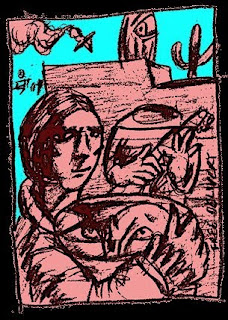 The canal from the Holbrook power plant gave off steam. Like a scene from a terraformed Mars.

Next came Meteor City. Unfortunately, it was just another roadside trading post. They should invest in a rocket, flying saucer, some larger-than-life aliens, or even a dinosaur of two. Meteor City should be a Fifties-style sci-fi metropolis with a spaceport, full of vehicles with Cadillac tail-fins.

We drove on. Besides, we were almost to Meteor Crater.

It was another lesson in perspective. And the snow just added another dimension. Like the Pyramid of the Sun in Teotihuacán, it looms large on the horizon and just gets bigger. The visitor center/museum becomes a gigantic complex as you enter. Movies and displays of actual meteorites only hint at the effect of standing on the crater’s rim, walking up and down the stairways, leaning over the railing. This the closest most of us will get to visiting a crater on the Moon or Mars.

Inside the crater, we could look down and see ravens flying.

In the gift shop I found David Hatcher Childress’ Lost Cities & Ancient Mysteries of the Southwest. Another reminder of the sort of thing we needed to be on the look out for. And a sign that we were on the right track.

We stopped at Walnut Canyon on a whim, we didn’t know anything about it, and it was trip into a lost world. Imagine a canyon of fantastic stacks of layered rocks. A forest grows out of the rocks. In between the layers, now and then, you see ancient brick structures of the dwellings of the people the Spanish called the Sinagua. There was also snow, in which the tracks of local predators could be seen.

3,000 year old figurines have been found there. 800 years ago, the canyon was the home of a farming community. Between 1064 and 1065 AD nearby Sunset Crater eruppted and transformed that world. Yet they didn’t leave until the big dry-up around 1300 AD. After wandering in the deserts, Walnut Canyon must have seemed like an earthly paradise, and it is unlike anything I’ve run across in fantastic fiction.

Later we moonwalked the Sunset Crater park. The black lava fields contrasted with the snow. What planet are we on again, honey?

Then we zipped up through the Ponderosa pines to Route 66 and Flagstaff. Where we had trouble finding our next motel. Google Maps had steered us wrong. Luckily, a young man who looked like he had stepped out of time warp from 1974 set us right.

And across the street was the Galaxy Diner. There were no hands on their clock, this being a crosstime joint, with Fifties decor with a sci-fi accent. The window announced: HOT ROD SHOW EVERY FRI. NITE. Our kind of place.

You never know when chunks of outer space will come crashing down and transform your world.