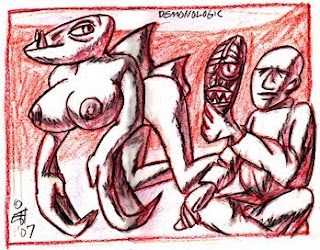 The next morning we bundled up, and explored the shops near the railroad tracks and murals around Beaver and Butler Streets.

This is the student/countercultural (whatever they call it these days) area. Macy’s European Coffee House and Bakery is the major landmark. The coffee is wonderful, and there’re all kinds of vegan pastries. (Carnivore fare can be found a few blocks away at the Bigfoot Bar-B-Q, where “Bigfoot eats vegetarians.”) The atmosphere is peace-freaky -- a car parked out front had a bumper sticker: REFUSE TO PAY TAXES TO SUPPORT THE WAR. I wondered which war they meant.

Young people wander around in hippie/punk/grunge attire. In the shops they smile and recite the costumer service mantra.

Among the candles, soaps, Western and winter clothes, Native American decor, and a really interesting rendition of the Hindu god Ganesha, I saw still another variation on the HOMELAND SECURITY: FIGHTING TERRORISM SINCE 1492 T-shirt. Guess no one has the copyright on that gag. I should make my own version with a scary Aztec warrior.

I bought a T-shirt for KUYI 88.1 FM, Hopi Radio, that had a Hopi Harlequin playing DJ in front an antediluvian microphone. They play a wonderful mix of local and global music -- the sort that will thrive after the corporate music biz crashes in a year or so. I can hardly wait until it can be heard online.

As we grabbed Cafe Mochas at Macy’s, a barista explained to a phone caller, “No, this is Macy’s the coffee shop. There is no Macy’s Deparment Store in Flagstaff,”

Toward Sedona the snow got thinner and patcher. The rocks got redder, and had Em going “Ooh! Ah! Oh baby!” Who needs a high-priced James Arthur Ray Sweat Lodge of Death when you can listen to these incredible rocks?

That’s “I will speak to you in stone-language/Answer with a green syllable” for you no habla types.

We found this trail that led past an abandoned house carved into the rocks, and other ruins from recent times. Icicles poured off fantastic rocks and all those fantastic rock castles. Later, Slide Rock was another lost world -- Memory Lane for Em, discovery for me.

Finally, we reached Sedona, and ate tacos at the Oaxaca Restaurant with a view of a great phallic hoodoo that watched over the upscale spiritual Disneyland.

As the sun set, we checked into the Sky Ranch Lodge. The view of the mountains that loomed over the town was incredible. They were spirituality in physical form.

The lobby had books and information about The Vortex, and other attractions.

I picked up a flyer for Elivs of Sedona. He sings, performs weddings, gives Vortex tours, takes aura photographs -- all dressed like Elvis! He’s available for “Corporate Events, Private Partys [sic] and Birthdays.” He’s been on America’s Got Talent!

I wonder he and James Arthur Ray ever hang out?