ATTACK OF THE FIFTY-FOOT ROADSIDE GODDESS 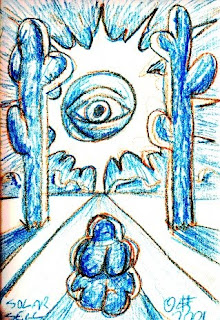 When we asked about an ATM, the woman at the Sky Ranch Lodge pointed to town without a beat. “They’re all over the main drag.”

And they were, glittering like a well-run theme park. A statue of a mountain man/wizard in the too-pretty-for-my-taste style of most Sedona art stood guard in front of Chase Bank. There was also a John Muir Reality that must have him spinning in his grave. Elegant, colorful signs advertised psychics, more than in Scottsdale, or Phoenix where they can be found next to radiator repair shops. Spirituality and capitalism walk hand-in-hand down these desert-landscaped streets.

Once you get out into the woodsy neighborhoods, the quirky homes often sport more modest signs announcing that psychic readings are available. The fantastic red rock landscape does make it seem more sincere. I wondered how they’re weathering the recession.

We even passed a trailer park with a gaggle of Mayan-looking guys in baseball caps waiting for day-labor gigs. Even this close to The Vortex, someone was needed to do the non-psychic work. It's probably the same in Tikal and Chichén Itzá.

In the labyrinth of mountain roads, we stopped to hike at Crescent Moon Ranch -- where the river was made into an impromptu fairyland with countless stacks of rocks -- and spectacular Red Rock State Park, that we learned would be closed down in near future. Sometimes the relationship between spirituality and capitalism ain’t so lovey-dovey.

I imagined all these executives coming to Sedona for their world-class spiritual retreat/vision quest/leadership seminars. They must go back home feeling centered and revitalized. Then they resume the business of raping the planet.

We were near Cottonwood, I was musing about how I don’t need to quest for visions -- I find them everywhere -- and the Great American Quest for user-friendly, pre-packaged spirituality when I spotted a gigantic figure in a gleaming white robe towering by the roadside: A fifty-foot statue. I assumed that the building near it was a church. It had its back to us, so I couldn’t see the face.

“Jesus, or the Virgin Mary?” I asked Em.

Then we passed, I saw the face, and was astounded. She was a blonde New Age Goddess with a ying/yang symbol on her forehead. She levitated the Earth between her delicate hands.

At her feet were other, smaller sculptures, also painted in bright colors, glowing in the afternoon sun. They were arranged as if it was a used-car lot.

After that the snow vanished. The landscape bended back into the Sonoran desert with saguaros, and rocks of different colors and forms, that spoke in other languages. Places had names like Dead Horse Ranch, Bloody Basin Road, and Big Bug Creek.

Soon we were back in our sweet home Metro Phoenix Area, negotiating Jay Silverwheels through a traffic jam as visions danced through our heads.