THE HARDBOILED HIPPOS OF WILLIAM BURROUGHS AND JACK KEROUAC 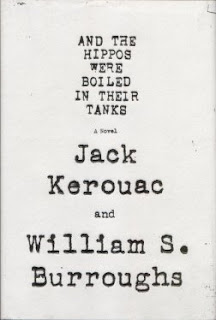 The story of the person who one day decides to write a novel that becomes a bestseller, sparking the beginning of a prosperous career, is one that inspires many and keeps the creative writing/writer’s workshop scam going. It is, however, a myth. If you can get a published author to be honest, they’ll admit that the book listed as the first one they published isn’t the first one they wrote. There’s usually a real first novel tucked away somewhere that made the rounds and never sold.

Sometimes these real first novels make it into print. As a writer, I find them fascinating. There’s just something about embryonic beginnings, struggling to find their way, especially if you know what they will someday grow into.

In And the Hippos were Boiled in Their Tanks, we get two iconic writers struggling that twisted path for the price of one. Jack Kerouac and William Burroughs created this book before anybody heard of them. There was no Beat Generation yet. They thought that telling the story of a murder a friend had committed, in alternating chapters, was their key to literary success.

And why not? Back in the Forties, the “hardboiled” crime genre was coming in to its own. Believe it or not, I had known about the book for years, admired the title, but it wasn’t until I finished the book that I got the reference to “hardboiled.”

(Personally, I prefer “hardboiled” to “noir.” It’s less pretentious, and more American, but I digress . . . )

Hippos is an entertaining read, yet I can see why it didn’t get published during its authors lifetimes, and why it did not become a “noir” classic beside The Maltese Falcon, The Big Sleep, and A Rage in Harlem. I don’t think we’ll be seeing a Hardcase paperback edition, and if by some quirk it happens, fans of the retro series may end up scratching their heads.

The alternating narrator format makes sense for Burroughs and Kerouac, but every publisher in New York will tell you that it confuses American readers. Though the 1944 bohemian world it depicts is fascinating -- with World War Two, homosexuality, and drug abuse -- “hardboilded/noir” fans might find it a bit unfocused. It meanders through Burroughsian aburdity and Kerouacian poetic travelogue, and the shamelessly sensationalized murder doesn’t take place until almost the end of the book. No tight, suspense-filled plot, though the conclusion is worthy of the genre at its darkest and best.

If there’s any hardboiled writer who is close to this book, it’s David Goodis. His heroes are doomed in a similar way. It’s another report from the edge of a corrupt society.

So, like other lost first novels, it's probably best to read this one for what it is, not its expectations. I recommend it for those who haven’t finished their own first novels. If you don't take that first step, you'll never go on the journey.

It also makes me feel better about my own first, unpublished novel, Nwatta-Nwatta-Nwatta.