I WAS A STARFARING CARTOONIST 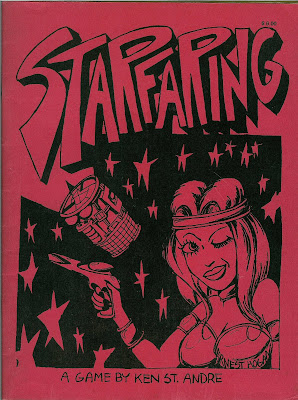 Googling myself is a defense mechanism. How else I am I going to find out about unauthorized translations of my work, or that I’m a Russian ringtone, or that a critically-acclaimed student film has been made from one of my short stories?

Uh-oh, I feel another flashback coming on – it was way the hell back in the Seventies, I gave up on institutionalized education, and was trying to somehow make a living as a writer/artist. This was before the summer of Star Wars. George Lucas had not yet made the world safe for nerds. Nobody knew what role-playing games were – or at least I didn’t.

I had gone to a science fiction convention in L.A. and put some drawings in the art show. The next thing I knew, I was talking to Ken St. Andre – who introduced me to Liz Danforth – and was hearing about these game things, and how he had created one that was science fiction, and needed illustrations. He thought cartoons would be nice.

I was controversial, as usual. Ken had to put in a disclaimer:

“None of the artwork herein included is meant to be offensive to any ethnic group, but is merely an attempt to represent more than white American masculinity in what we hope is an amusing fashion. (Now, having disclaimed intentional racism, sexism, or alienism, all I can say is if you don't like the artwork, that's your problem.)”

They were afraid that I was going to offend minorities.

I got paid a few bucks per cartoon, and even got a few royalty checks. Whoo-hoo!

I experimented with a Starfaring comic strip. Ken ran a few examples in the publisher’s magazine.

But gaming never impressed me. I'd rather go find real adventure than simulate it with dice and a calculator. So I drifted off into other pursuits – like writing.

And now Ken has hooked up with Outlaw Press, and has reprinted Starfaring, reedited by Ken, with my cartoons. The Googling was how I heard about it, so there have been no payments. 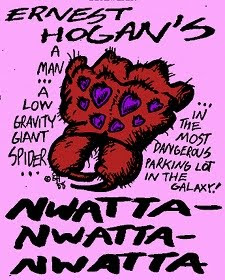 Instead of getting mad, I’m exploiting the situation to yap about my first novel. Not Cortez on Jupiter. The first one I wrote, not the first one to get published. It grew out of the Starfaring cartoons, but by the time I wrote it, I was out in some very different territory.

“This kind of avant-garde stream-of-consciousness stuff is really hard to get into,” Ken warned me.

The funny thing was, I was trying to be commercial. I honestly thought that a cross between Hitchhiker’s Guide to the Galaxy and Fear and Loathing in Las Vegas was best-seller material.

The only story excerpted from it, “Love Nwatta-Nwatta-Nwatta Style” has seen print. That was in Pulphouse: The Hardback Magazine, Issue Two, Winter 1988. Thanks to Kristine Kathryn Rusch, the only editor crazy enough to touch it.

Now, the publishing world that thought Nwatta-Nwatta-Nwatta was “too zany” is crashing. I may publish it myself, just for the sheer hell of it. Some people may get a few laughs out of it.

And part of me thinks that this book has had an audience all along, that has been waiting as everything gets zanier and zanier. 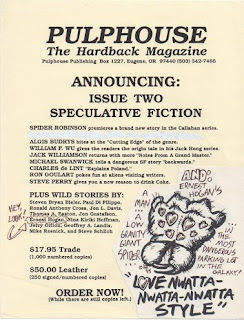