COWBOYS, INDIANS, DINOSAURS, AND UFOS IN THE NEW WILD WEST 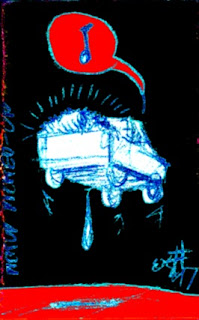 As we approached Holbrook, there was this white stuff all over the place. They call it snow. I haven’t seen much of it in my desert-bound life.

And these days, most of the cowboys -- and people working in the gas stations, restaurants, and hotels -- are Indians or Latinos. And some of the Indians are from India.

Out of the window of our room in the Holbrook Best Western Adobe Inn (that was not made out of adobe) we could see the Wigwam Motel with its concrete teepees standing in front of the permanent steam cloud from the power plant. Colorful sculptures of cartoony dinosaurs beckoned us to enter rock shops that sold petrified wood, animal fossils (yeah, I know petrified wood is tree fossils), tourist kitsch like Fifties-style plastic bows with suction-cup arrows, and UFO driver’s licenses. There was something delightfully unpretentious about it all, a bit of fun before we entered the Petrified Forest.

And the Rainbow Forest Gift Shop & Museum just outside the Petrified Forest National Park had not only painted dino statues, but a concrete teepee with a dinosaur painted on it. The Museum just inside the park had some great displays, and a movie about the Triassic Period, when the desert was a great swamp full of towering trees, dinosaurs, giant amphibians, and crocodiles. Environments change -- get used to it.

Driving around the park was like an interplanetary expedition. When we went EVA, we had to bundle up like astronauts. The landscape, colorful, striped hills and shattered trees turned to stone, with lava contrasting with snow and showing the hoodooization process in action, was better than any special effects.

Lost civilizations were represented in Newspaper Rock and the Puerco Pueblo ruins. Both had many petroglyphs -- they get more interesting the more I study them. The pueblo was abandoned around 1300. There is a dry river bed nearby. Is the river you depend on going dry? Should you be considering migration?

And at every stop, when we popped Jay Silverwheels’ doors, we were greeted by pairs of ravens. Em suggested that they may have been the same pair following us. They had no fear of humans, and didn’t mind posing for pictures. One made a clippity-clop noise with its beak, as if it were trying to talk.

I has a vision of a cowboy on dinosaur-back, fighting with an Indian on a flying saucer, while in a distant mesa, a busload of tourists watch and take pictures. It haunts me. Maybe I can talk someone into letting me do it as a mural.