SCROLLING DOWN THE ROAD OF ORIGINAL KEROUAKINESS 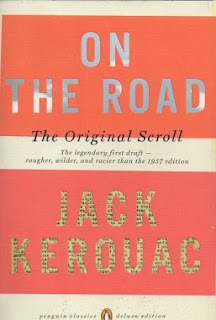 I prefer to think of Jack Kerouac as the self-mythologizing angel-headed hipster rather than the guy who drank himself to death in his mom’s house. Rudy Rucker’s stories about him (“The Jack Kerouac Disembodied School of Poetics,” and “Instabililty,” co-written with Paul Di Filippo) are preferable to his real life. Still, I was irresistibly drawn to On the Road: The Original Scroll. Having been through my own trials and tribulations with trying to fit my visions into the dinky formats of the publishing industry, I’m obsessed with what people come up with before those in power make it palatable for the masses.

Besides, I’ve always felt the need to expose myself to raw weirdness. Drop the filters. Maybe a few particles of truth will get through.

The introductions smash the myth of spontaneous prose. Sorry kids, but you actually have to work, edit, and rewrite to create the feeling of spontaneity. You can’t just turn on a camera or tape recorder Warhol-style, and let a masterpiece happen. It takes brain work.

And what a work it is. I always felt that the weakest part of Kerouac’s books were where they pretended to be novels. Here it all just unrolls: a vision, a search for a way of life not offered in Post-War America’s agenda.

Yeah, the one-long-paragraph thing takes some getting used to. It does get you reading, stopping, starting outside of your usual habits. In our world of constant interruptions, it is valuable experience.

The real names are better than the silly pseudonyms. And the uncensored sex and language makes it all seem more real. Somehow I remember the “novel” version in black in white, but I visualize the scroll in color, and on a wide screen.

The important feeling of being on the road is stronger. That forward motion, and the universe coming at you -- wrapping around you through the windshield. America is a land of roads that are forever taking you to new worlds, some dying, some being born, all in a constant state of transformation with Neal Cassady, the Holy Goof, archetypical counterculture hero, talking us all into an aimless quest, never finding the father he was looking for. When asked “Whither goesth thou?” and what sordid business he’s up to, he makes fun of the pretentious language.

I caught part of 2001 on cable while I was finishing up the scroll. Kubrick’s bored, alienated astronauts brood in their sterile spaceship while the angel-headed hipsters approach the Aztec capital screaming in ecstasy with their shirts reeking of insecticide and coated with dead bugs. Which is the better attitude for exploration?

When I took it along to read on my last road trip, it kept my eyes sharp for the cherchez de weird, and reminded me how much I love being on the road.

And does it matter whither you goeth, or what your sordid business is, or if you drink yourself to death in your mom’s living room, or drop dead counting railway ties for a stupid bar bet? Could it be that dreams, visions, and realities that are the road are what’s important? Do you know what diddy-wah-diddy means? Do you got the boogie in you? Are you ready to launch?