Sometimes an illustrations arrives a few days late. After I posted "Cockfighting in Cyberspace" my wife Em mentioned the images of fighting cocks that were used as popular kitchen decorations back in the Fifties. Later, I realized that we had a wonderful example in our own kitchen. This black metal rooster would be a perfect companion for the quote from Ishmael Reed's poem, "The Black Cock."
He didn't quite fit into my scanner, but I managed to slide him into nice composition. Then I diddled around in GIMP to give him some stark contrast and screaming color.
So, better late than never, here he is . . . 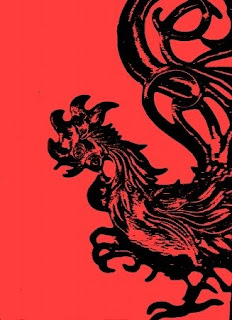