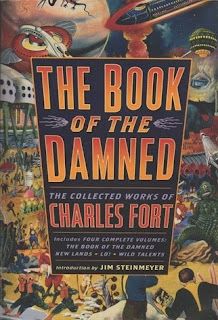 My favorite news source is the Breaking News page of ForteanTimes.com. I had to buy Charles Fort's The Book of the Damned (actually an omnibus that includes that title, plus New Lands, Lo!, and Wild Talents). That fact that it has an incredible cover painting by Anton Brzezinski, from Forrest J Ackerman’s collection, based on the work of Frank R. Paul, was pure gravy.

I spent months reading the fat, now-dog-eared trade paperback. It helped me through a tumultuous year. The amusement and chunks of mind-stretching materials made it worth plowing through those old-fashioned, convoluted sentences.

It’s good to expose yourself to styles that are unfamiliar and require extra effort. People who need everything they read to be in a simple style tuned in to their generation are numbskulls. They’re almost as bad as those folks who only understand one language.

Compared to many of today’s advocates and fans of all things paranormal, Fort comes off as a skeptic. He doesn’t really ask you to believe anything, which is refreshing. He’s reporting things from the press and from scientific journals. He’s hard on science, especially when it thinks it knows more than it actually knows. His sense of humor, in today’s paranormal scene, could get him burned at the stake.

Or as he put it: “I do not know how to find out anything new without being offensive.”

Much of the phenomena he describes are the same as things that are reported today. Ghosts, strange creatures, objects in the sky, rains of peculiar things, mysterious appearances and disappearances -- all seem to have been with us as long as human beings have been exposing their sensory arrays to the universe. There's a problem there. We don’t seem to be able to take in what’s around us in its entirety without weird things happening.

Or appear to be happening.

I’ve called it the Monster Reflex, and the Chupacabra Effect, and as long as it's mutating and splitting off into new variations on a theme, I’ll probably have to think up new names. This is because these phenomena change as time goes by and according to who’s observing them.

Or to quote Fort again: “Witchcraft always has a hard time, until it becomes established and changes its name.”

Today, unidentified things in the sky are believed to be spaceships, or time machines. In the 19th century, they looked like airships. Or marching armies.

Nobody sees marching armies in the sky any more. Too bad. It makes me wonder about the origin of the song “Ghost Riders in the Sky.”

Photographs of celestial phenomena all look like featureless blobs of light. Some people prefer to think of these as angels, devils, or witches.

Wouldn’t it be funny if all our attempts to explain these things were wrong, and the truth is something we just haven’t figured out yet?

Meanwhile, Charles Fort’s work provides us with a record of weirdness past and a warning not to assume we've figured it all out.