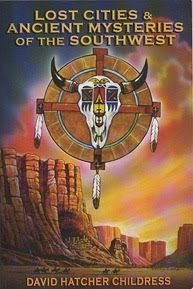 I’ve always lived in the Southwest, the Wild West, Aztlán . . . names, labels, languages, they change as time goes on. The landscapes we think of as timeless are actually just frames in the movie of spacetime. When we look at places where we live, there’s a lot we don’t see.

“Modern-day Phoenix is aptly named, as it is indeed a city which has risen from the ashes of an earlier metropolis, a city whose name we do not know. The name may have been Cibola.”

That’s from David Hatcher Childress’ Lost Cities & Mysteries of the Southwest. Childress has become one of my favorite writers, along with Tahir Shah. They have revitalized the travel genre, and show that adventure is still out there.

Childress is often described as a “real-life Indiana Jones,” and “maverick archeologist.” You can often catch him on the History Channel singing the dubious praises of Erich Von Däniken. He is responsible for Adventures Unlimited Press, and the World Explorers Club.

He approaches travel writing with a sense of fun and adventure that doesn’t steer away when things get weird. If things start to seem like old-fashioned pulp science fiction -- so much the better.

He also does his homework, speaks fluent archeology, reads the musty old tomes, then goes out to scenes and investigates. I find myself wanting to read those tomes (which he often has reprinted and has for sale). I also get the urge to check out the scenes.

Lost Cities & Mysteries of the Southwest is a treasure trove of weirdness that I can drive to. Maybe sometimes it will take a few days, but what the hell! There’s lots of interesting geology for Em to look at along the way.

There are strange lights in the sky, lost gold mines, tales of Egyptians in the Grand Canyon, underground civilizations in the Superstition Mountains and Death Valley, strange artifacts, and of course, monsters. Some of it is roadside tourist-trap stuff -- a great American tradition -- but others may have more to them.

Like The Thing, off I-10 near Tuscon. I’ve been avoiding it for years, but now that I know that it’s actually two mummies, it’s on my list of places to see.

Then there’re the Hohokam canals that I crisscross daily. I’ve been to the Toltec-style ballcourt by Sky Harbor Airport. I can understand why Childress says, “where Phoenix stands today, was once the center of a great civilization that turned the desert into an agricultural paradise . . .”

The Seven Cities of Cibola may have been located in the Metro Phoenix Area. They were also known as the Seven Cities of Gold. While driving to work, I’ve experienced a curious phenomenon -- when there’s a rare morning mist, and sun slants in just right, for a few precious seconds, the mist turns gold. The city turns to gold.

I have found what eluded the conquistadors. I live in Cibola, Aztlán. Thank you, David Hatcher Childress.