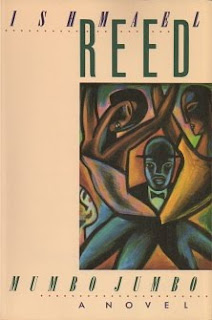 I first saw Ishmael Reed at the first Mt. San Antonio College Writer’s Days, back in the Seventies. I hadn’t heard of him. At the time I was more interested in Ray Bradbury, Harlan Ellison, and George Clayton Johnson because of the science fiction connection.

There was something about this big, black man talking about “a crisis of the imagination in this country.”

It took me a while to get around to reading Mumbo Jumbo. A girl in one of classes warned that “he has a difficult style.” But I was reading William Burroughs and the New Wave of speculative fiction by then, hungry for writing that would give my mind a work-out and maybe expand it a little. And the Saturday Review called it “an all-out assault on Western Civilization.” I couldn’t stay away.

Mumbo Jumbo delivered. It succeeds in thrusting you into another world, better than most science fiction even comes close to. Set in Harlem in the Twenties (time- rather than space-travel), the world of PaPa LaBas, Jes Grew, and the Wallflower Order comes at you in a barrage of multimedia collage/narrative that’s more like a movie than a book. And it’s so information-rich that it puts the “crammed prose” of the cyberpunk movement to shame. It presents the tradition of African American culture -- that is not a “minority” subculture, but a driving force behind American culture -- and pioneers an Afrocentric viewpoint that comes close to a documentary manner -- it has a “Partial Bibliography.”

It also gave me a tour through the world that created some of my favorite music that came my way through the Fleischer Brothers and Doctor Demento.

It set my head spinning and my imagination soaring. The world looked different after I read it. What more can you ask from a book?

I became a fan of Ishmael Reed, sought out this other writings. And I felt compelled to re-read Mumbo Jumbo. Again. And again. Yeah . . . maybe something downright hoodooistic is going on there.

I scoured the bookstores and libraries, hoping to find a writer who was doing for my culture what Ishmael Reed did for his. He’s said over and over, “it’s not a ghetto -- it’s a galaxy.” Could a Chicano do the same?

After a while, I stopped looking. I realized that as a writer, and a Chicano, it was up to me. I don’t think I’ve succeeded, yet.

The closest I’ve come to my own Mumbo Jumbo is High Aztech -- my “cult” novel. I quoted Ishmael Reed (along with Carlos Fuentes) in the epigram. A reviewer attributed the quote to Mumbo Jumbo, but it’s actually from “Black Power Poem.” Tor probably wouldn’t have published it if I had cited that title.

Come to think of it, an exercise in cultural necromancy disguised and published as sci-fi is a bit of a miracle. Maybe Neo-HooDooism is alive and well.

Meanwhile, I’ve got some lost galaxies to recover.