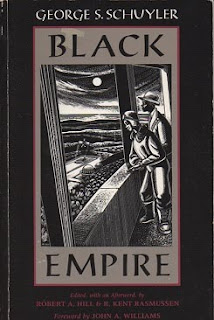 Most pulp fiction -- science, or otherwise -- from the Nineteen-Thirties was about WASP heroes rescuing pale heroines from guys who looked like me. But there is no single, universal audience, or market. Pulp adjusts itself to the consumers. Minorities, majorities, good guys, bad guys -- it all depends.

Take the case of George S. Schuyler. He’s best known for his novel Black No More, a science fiction satire about a black man turned white, who then becomes a white supremacist leader. Schuyler pioneered as a black conservative commentator. He wrote pulp fiction for a black audience, including Black Empire, a remarkable work of sci-fi.

While working for the Pittsburgh Courier between 1936 and 1938 -- when the Nazis were flexing their muscles in Germany -- Schuyler supplemented his income by a serial episode or a short story every week. These stories ran the full range of pulp genres: love stories, crime (possibly the earliest examples of “blaxploitation”), adventure (lost cities in Africa), horror (a mad scientist experimenting on Harlem showgirls), and even science fiction.

Black Empire, published in book form by Northeastern University Press in 1991, consists of two serials, The Black Internationale: Story of Black Genius Against the World and Black Empire: An Imaginative Story of a Great New Civilization in Modern Africa. They tell of Dr. Henry Belsidus, who has a lot in common with Fu Manchu, Dr. Mabuse, and other pulp evil geniuses.

Dr. Belsidus is first shown murdering a white woman. He makes an allusion to Petronius’ Satyricon, and enlists the reporter/narrator in his conspiracy to advance the Negro race. “We have science of which the white man has not dreamed in our possession. We have courage. And we are ruthless.” So ruthless that black traitors are executed and dissolved in a vat of acid.

This is not the usual satire that Schuyler, a disciple of H.L. Mencken, is known for, but action-packed pulp. Schuyler must have been familiar with the pulps and science fiction of the times. The difference between Black Empire and other science fiction of the era was that it was about war against white people -- a town guilty of a lynching is fire-bombed into oblivion, and that’s only the beginning.

The book bursts with ideas -- solar power, hydroponics, a vegetarian/raw foods diet, fax machines, an Egyptian-style Afrocentric love cult, and electric death rays. He didn’t take it seriously: “I deliberately set out to crowd as much race chauvinism and sheer improbability into it as my fertile imagination could conjure. The result vindicated my low opinion of the human race.” The result is more fun and cleverer than some of the futuristic novels that have become required reading in the schools.

Dr. Belsidus conquers Africa, then with the help of his Mata Hari-ish white mistress, cripples Europe with bacteriological warfare. The Twentieth Century in this alternate universe is quite different. It would be interesting to see a novel set in that world, a few decades later, say the Sixties . . .