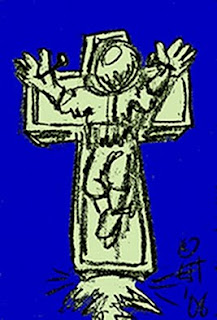 Crucifixion started out as a form of capital punishment, not an expression of religious symbolism. It didn’t have anything to do with Christianity. As Sir Richard Francis Burton put it in a footnote to Vikram and the Vampire, “Crucifixion, until late years, was common amongst the Buddhists of the Burmese empire.”

Yet, there’s something about public execution that yearns to be more. And if you give it today’s fantastic means of world-wide communications, we have the Great Global Live Crucifixion Show.

Still, it’s a way to kill. Attaching someone to a cross slowly squeezes away the ability to breath, resulting in suffocation. Even a few hours of it does damage.

In Dangerous Border Crossers, Guillermo Gómez-Peña tells of how in 1994, a week after Easter, he and Roberto Sifuentes crucified themselves as part of The Cruci-Fiction Project. “Our tongues, torsos, arms and hands had lost all feeling, and we were barely able to breathe from the pressure of the rib cage against the lungs.” The next morning Gómez-Peña’s doctor said, “Another half hour and you would be dead.”

So, please, don’t try this at home, dammit!

Holy Week/Semana Santa provides a cultural forum to celebrate the crucifixion of Jesus Christ -- as a prelude to his resurrection. Lent set us up for self-denial, and penitentes feel the need to repent in public by wearing the masks with pointed hoods that the Ku Klux Klan appropriated. Sometimes they carry their own crosses (both the penitentes and the Ku Klux Klanners).

For some, costumes and props aren’t enough. Mortification of the flesh is in order, with the time-honored tradition of self-flagellation. Again this isn’t exclusively Christian, Muslims and Hindus do it, too. Even the Aztecs and Maya knew that there’s nothing like pain and blood to make it feel like the guilt is melting away.

Take a few more steps along this path, and we come to custom of getting yourself crucified on Good Friday. As the Passion Play, it’s done all over the world. Sometimes realistic portrayal of the crucifixion is not emphasized. Besides, the Catholic Church does not approve of self-flagellation or crucifixion.

But then, not far from where I live, there’s a religious school with three full-sized crossed in the yard. They have foot-rests and straps.

Also in the Philippines, where real nails are used, in San Fernando, Pampanga, where the festival is sponsored by Coca-Cola and Smart Telecommunications, officials, “autoclaved all the nails and will administer anti-tetanus vaccine.”

This is even though, when the nails are driven into the “Christos,” they don’t bleed. This may be something like the body-piercing rituals in the Hindu festival of Thaipusam. Why isn’t medical science studying this?

Last year there were scandals. A bikini show caused foreigners to be banned from being crucified in Cebu and Pampanga provinces. An Australian comedian used his crucifixion on his TV show, but the Department of Tourism decided that his show did not ridcule the rites, so foreigners are welcome to get nailed in Barangay.

Even though they use special nails with a handle-like strap that doesn’t penetrate the hands, the reenactment in Iztapalapa, just outside Mexico City, is the biggest in the world. The crowds get so large and difficult to control that this year alcohol will not be sold. It’s come a long way from the days when a priest would dance around in the skin of a young man sacrificed to Xipe Totec.

It’s quite a show, in which the frame that separates performance from reality blends, like the fake and real blood co-mingling on the body of the actor playing Jesus. Real flagellantes beat themselves alongside the Roman soldiers beating Jesus, while angels watch. Performer’s wireless microphones, and the audience's recordings on their cell phones, give media coverage a surreal edge.

And there are also belly dancers.

Where is this all leading? Maybe Ernest Hemingway stumbled on some truth when he joked in Death in the Afternoon that, “A crucifixion of six carefully selected Christs will take place at five o’clock in the Monumental Golgotha of Madrid, government permission having been obtained.”