HOMEWARD, THROUGH XANADU AND THE CENTER OF THE EARTH 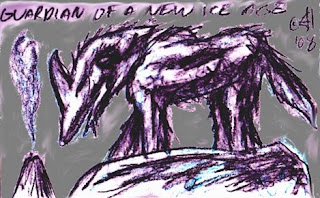 The snow that had fallen on Bisbee had vanished the next morning. The Storm Goddess giveth, the Sun God taketh away.

Over pancakes we discussed the underground cities and cave hotels of Cappadocia with a guy from Turkey. Then it was one last drive down Tombstone Canyon, and off to Kartchner Caverns. A mutilated jackrabbit decorated the roadside.

Along Highway 90 we saw lots of Border Patrol, like a convention. They weren’t really doing anything, just sitting there in marked vehicles ready to go. I was glad I was driving with my wife and mother-in-law and not a troupe of illegals and a bale of marijuana strapped to the roof.

While ogling the fantastic mountains -- we seem to find them everywhere -- Em mentioned that she will have to carry a small amount of diluted hydrochloric acid so she can identify rocks. I imagined being on another vacation with her, surrounded by tourists, and her suddenly saying, “Ernie! Where’s my acid? Did we bring enough acid with us?” Depending on who was around we would either be arrested or they would try to talk us into buying ecstasy instead.

Maybe I should buy a Border Patrol cap and wear it while traveling, to avoid suspicion.

By the time we reached Kartchner Caverns, the sky had become a complicated, crowded cloudscape that occasionally dropped grey curtains of rains on distant vistas and light sprays across the windshield. The Discovery Center and the Cavern Tour were wonderful, but then, I’m a sucker for a place were you can get face-to-face with a replica of a giant sloth.

The cavern was another incredible world. A rare living cave -- which means it has water flowing through it and causing geological formations to grow -- it was hot and humid inside while it was cold outside. The formations were magnificent. You can tell they are “alive.” While looking at them, you get the impression that they are looking back. And when you look past them into the blackness . . . you know why geologists say it's a “living” cave.

The tour climaxed with a spectacular sound & light show that managed not to seem like typical tourist hokum. But then, its star, Kubla Kahn, the largest cave column in Arizona, is truly astounding, more magnificent than Max Ernst’s similar creations. I was expecting an experience out of Jules Verne’s Journey to the Center of the Earth -- and I was not disappointed. The discoverers of the caverns called it Xanadu to keep it secret, and Kubla Kahn and his kingdom tell us that fantastic subterranean worlds do exist.

Someday we will travel “Through caverns measureless to man/down to a sunless sea”, like Samuel Taylor Coleridge described in his poem. If not on Earth, maybe on another planet.

Water exists on the Moon, Mars, and even Mercury. Could they also have living caves?

And what about the planets that have other liquids?

On the way home past Benson, there was a little more rain, another dead jackrabbit, and another Border Patrol car.