QUIXOTING TO NEW MEXICO AND BACK: PART TWO

In Taos, the Jesus Sale at El Camino Real Imports was still going on. They had the Crazy World of Arthur Brown's apocalyptic Fire playing on the radio, making all the dazzling colors seem to burn brighter. This place makes me wish I was opening a Mexican restaurant or making a psychedelic spaghetti western. Oh, for a day-glo sombreo among the Zapotec wool coasters, and albrijes (fantastic wooden, painted animals).


As we headed out of town, a restaurant advertised CHICHARRON BURRITOS.

Last year, a helluvalot of the cow signs on the highways had UFO stickers on them. I marveled at what a tremendous project putting them up must have been. This year they were gone – getting rid of them must have been quite a project, too. But I did spot a few UFOs stuck on signs far from the towns. You can't keep a good myth down.

The rain had water running in the Rio Grande. It would be sad if the Rio went dry. Would they have to be called drybacks?

Modern day conquistadors, brothers to the Quijotes! The casinos are your Seven Cities of Cibola! Gamblers, offerings to Estevanico are in order!

Electronic cigarettes have taken off in New Mexico. Vapor stores are all over, with colorful signs, more of them than last year, more plentiful than casinos. Even thrift stores sell vapor flavors.

A lot of New Mexico businesses don't accept credit cards. Like the way Pancho Villa didn't trust cash – shot people who came to him with piles of paper – he prefered gold.

At an Española intersection, a bearded, bandana'd vato in a pickup that spewed country music mistook me for somebody named Harvey. He was a Quijote. No doubt.

One of the many murals in Española, a new-looking one, had a young, brown migrant working in the fields, wearing an iPod. This is the 21st century. The future is everywhere.

We visited the birdman and the petroglyphs at Bandelier National Monument The datura was wilted by the cliff dwellings. Having seen the acid western Greaser's Palace again recently, I realized that the Frijoles Canyon ruins were where Toni Basil's topless Indian maid scene was filmed.

So long ago. A more innocent time.

Past Los Alamos, along N.M. 4, there are lots of fenced-off secret lab-type places – called technical or tech areas. There are signs saying, NO TRESPASSING and EXPLOSIVES --KEEP OUT. Some folks say that Area 51 in Nevada is all disinformation, and the real, weird secret government bases are in New Mexico.

The volcanic terrain here would be perfect for such things. Underground bases could be dug around the caldera where signs announce ELK VIEWING ONLY, AREA CLOSED TO HUNTING.

Near the Indian kiva and Spanish mission ruins of Jemez, hidden by the roadside, there's Soda Dam that looks like the head of giant reptile with a waterfall in its mouth.

We kept seeing the sign: MANAGED BURN – DO NOT REPORT.

And we visited the bison/buffalo in Truchas again. They put up with us as we looked at them across their waterhole. I think the big male recognised us. 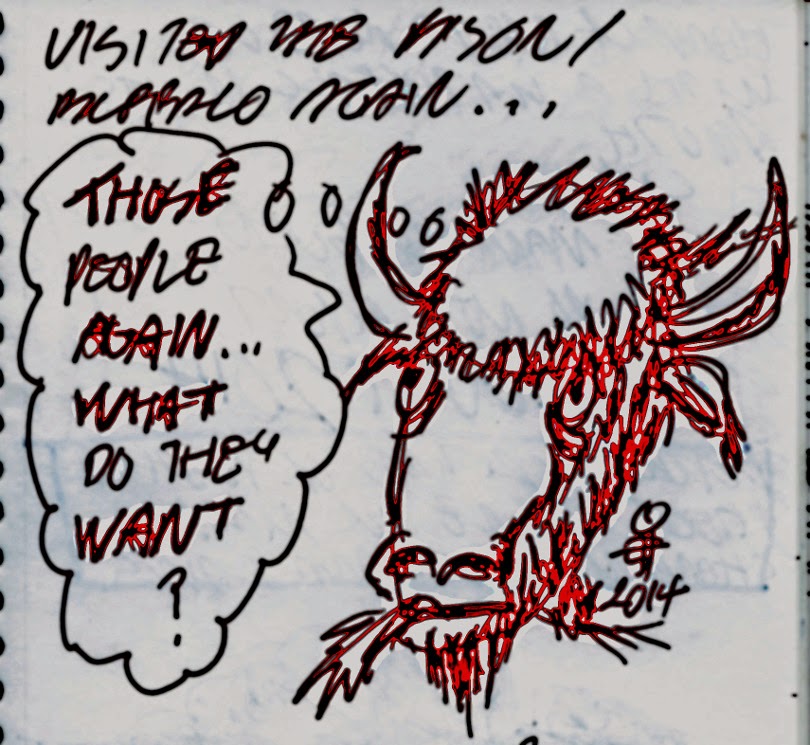 On a tourist stroll through Truchas, a grasshopper crashed into my face and flew on.

The Catholic church on the High Road to Taos was built in 1955, which makes it as old as I am. Shotgun shells and mini liquor bottles littered the street in front of it, the art galleries and old cemeteries.

There's also an historic mission build in 1764. Two guys listening to Tejano accordion music on their boom box seemed to be working on it. Or were they just having a few beers?

Back in Santa Fe they did their end-of-summer burning of Zozobra, or Old Man Gloom. A variation on the post-Easter Judas figures in Mexico and other Catholic countries. Zozobra is stuffed with papers on which people have written their worries, and they all go up in smoke. Not a bad tradition.

On the way back to Arizona, we saw two young Indians standing by a truck draped with a spray-painted banner that said ROBOT HEAD. Quijote business of some kind, most probably.

As we made our way down the roadkill-spattered highways, through the casino-studded deserts, I saw a billboard announcing COOL STUFF! Illustrated with an ornate Mexican skull, and I misread a sign: NAVAJO TIME TRAVEL PLAZA.