If only I could have seen my "X" scared face at that moment. Judging by the looks of horror on Vampiko and Lalaita's faces and the collective gasp from the audience, my expression must have been something else.

For a second, the lights, and all power in Global Delights went off.

For a second, the entire Undernet went offline.

For a second, I was in control.  Wow!

CONGRATULATIONS, FLASH, YOU DID IT, said Califia.

I was aware of what was on all the computer monitors in the building, and could affect them. The cockroaches danced to my tune.

Broadcast TV feed: A popular right-wing talk show host is disturbed by digital insect images clogging his laptop screen, suspecting liberal sabotage, he turns it off, and changes into a  giant cockroach. The studio audience is overcome with lust, scar-covered, erect penises spring out of the tailored pants, and from under modest dresses (all "female" audience members being transvestites due to the host's unfortunate allergy to estrogen) and soon break through the cockroach's carapace as he screams, "It pays to sodomize!"

I accessed the p.a. system, and sounded like an electronic god: "IT'S BETTER THAN YOU CAN IMAGINE. I MAY NEED A NEW HYPOTHALAMUS TO HANDLE IT. YOU AIN'T SEEN NOTHING YET!  WATCH THIS . . ."

I took control of the lighting system, and dazzled them with flashing light and color.

Cable feed: A famous televangelist suddenly grows pale, breaks out in heavy sweat, and masturbates live, and on the air.  Afterwards he wipes the semen off his pudgy face, cries, and says, "The Lord made me do that.  Send money -- lots of it, or He'll make me do it again."

It was all getting too good to keep to myself. I patched my Undernet scans into the p.a. System.

"What are you doing?" Vampiko looked deeply disturbed.

"Giving them what they asked for," I said.

"MAYAN REVOLUTIONARIES HOLDING AN AUCTION FOR VIRUSES BASED ON NEWLY TRANSLATED HIEROGLYPHICS NEAR THE RUINS OF PALENQUE."

Weapons systems were fired up all over the building.  I overrode them.

Then individuals drew their sidearms -- which I couldn't control.

NEXT WEEK: NEVER TURN YOUR BACK ON YOUR BRAIN 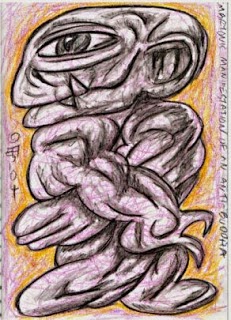