BRAINPAN FALLOUT: 28- NEVER TURN YOUR BACK ON YOUR BRAIN

My reflexes approached the speed of light. Grabbing Vampiko and Lalaita, I has us on the floor a few nanoseconds before the bullets whizzed by. If it wasn't for the chip we'd all be dead.

Then the chip fed it to me: Krell.  Brainboost. Monsters from the Id. They're from an old, cornball sci-fi movie that my parents always got a kick out of.  Forbidden Planet.  Oh no!  Could my parents be in on it?

"Let's get out of here!" said Vampiko, who split her lip with a fang. Blood dribbled down her chin. Somehow, it looked right.

"Never turn your back on your brain," said my mother's voice, " -- you never know who or what's in there with you." It was years ago. I was in my underwear watching MTV. She was in protective gear that looked like a spacesuit. My father was in another room, howling like a wolf. Overhead, helicopters slashed the night sky with their searchlights.

"This way," said Lalaita, pulling on my wrist.

A saguaro waved an AK-47, said, "Remember, your mind isn't the only thing going on in your brain," then sprayed a pockmarked Sicilian and a scarified Nigerian who locked in hands-on-throats dance of death with bullets.

Suddenly, I was on my feet, Vampiko and Lalaita had me by the arms . . .

"Yes," said Lalaita, "it is a good thing that these thugs paid up in advance, no?"

There was chaos all around, inside and out of my throbbing head: EMERGENCY! The tattooing around the wrist of a yakuza as he used his wakazashi to slash open the tailored suit of an effeminate, mestizo narcotraficante all the way down to the spleen.  EMERGENCY! Several on-the-take LAPD officers mercilessly beat an unidentified black man. REENCRYPT ALL SYSTEMS! A cute, little Filipina with large plastic breasts reached over and cut the penis off blue-eyed All-American boy. CLOSE ALL COMEONS!  A gang of homeboys mercilessly beat a man with long, blonde hair.  RELEASE DEFENSIVE VIRUSES! Troops in strange, unmarked uniforms appeared out of the shadows, and randomly opened up with automatic weapons. EMERGENCY! The Undernet flashed me the logistics on an air battle between several brightly painted Cruise missiles, four antique Huey Cobra attack helicopters, and a huge cargo copter of some unknown make. EMERGENCY! It was taking place just right over my head.

NEXT WEEK:  CIVILIZATION IS AN UNNATURAL ACT 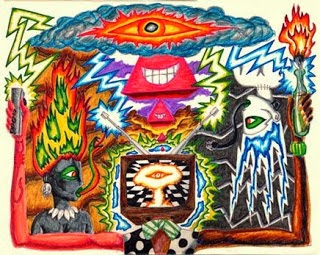