We were in front of the church on 7th Avenue and Ocotillo, a futuristic thing, designed by Frank Lloyd Wright. Its most prominent feature was an obelisk out front that looked like an alien sex organ, ready to take off and launch mutagenic sperm into any passing 747 or even the space shuttle. To the enlightened in town it was known as the Church of the Alien Penis.

"Wow," I said, forgetting about the smoking missile I couldn't let go of. "Vampiko would have killed us if we hurt it."

The Alien Penis had become a central part of Vampiko's eclectic religious beliefs. She would often come here in her all-black Volkswagen on nights of the full moon, and bare her implant-enlarged breast to it. "It renews their power as sacred objects," she would explain.

Finally, after they were sure both the Alien Penis and the van were all right, Doc and Obie looked over at the missile and me.

They got these horrified looks. Doc gave out a lady-like scream.

"Flash," said Obie, "get away from that thing."

The missile shook, rattling my spine, and let out more lung-scorching smoke, then fell apart into tiny pieces. The pieces in turn fell apart and crumbled into a flakey dust that blew away in the evening breeze.

"Damn," said Doc, delicately stamping his foot. "I was hoping we could get it back to my place so I could examine and cannibalize it, could you imagine what software and hardware would be needed to . . ."

"Yeah," said Obie, with a sneer that shifted the position of his scarifications, "and what would you do with it? Let it sit in your storage locker next to your virus collection?"

"It's the most comprehensive collection of self-replicating programs on the planet!" shrieked Doc.

Meanwhile, now that the missile was junk, the chip gave me back control of my arms and legs. I assessed the damage: The burns on my hands, weren't too bad. The bandages were all hanging loose about my head by now.

Then something moved next to the Alien Penis. A saguaro.

The saguaro pointed a TEK-9 at us and said, "Do not move."

NEXT WEEK:  THE REPTILE CONSPIRACY 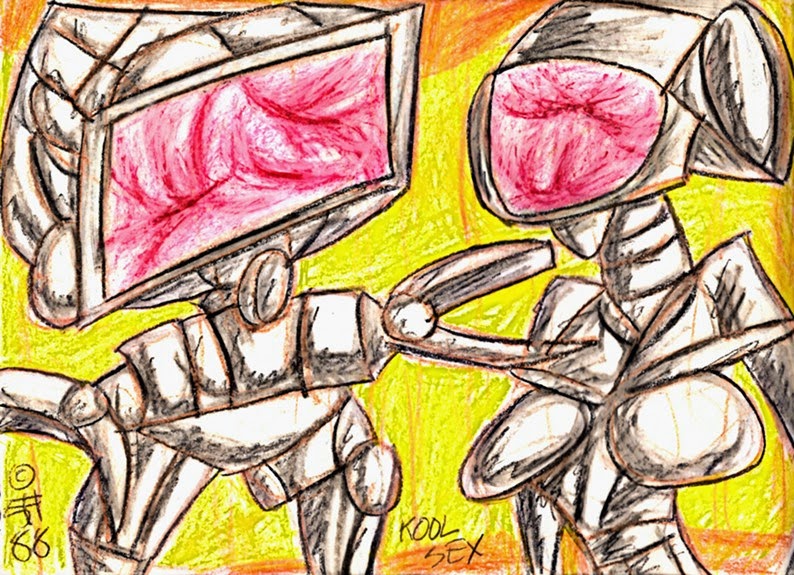