ROUTE 66 TO TERRA INCOGNITA AND THE GRAND CANYON 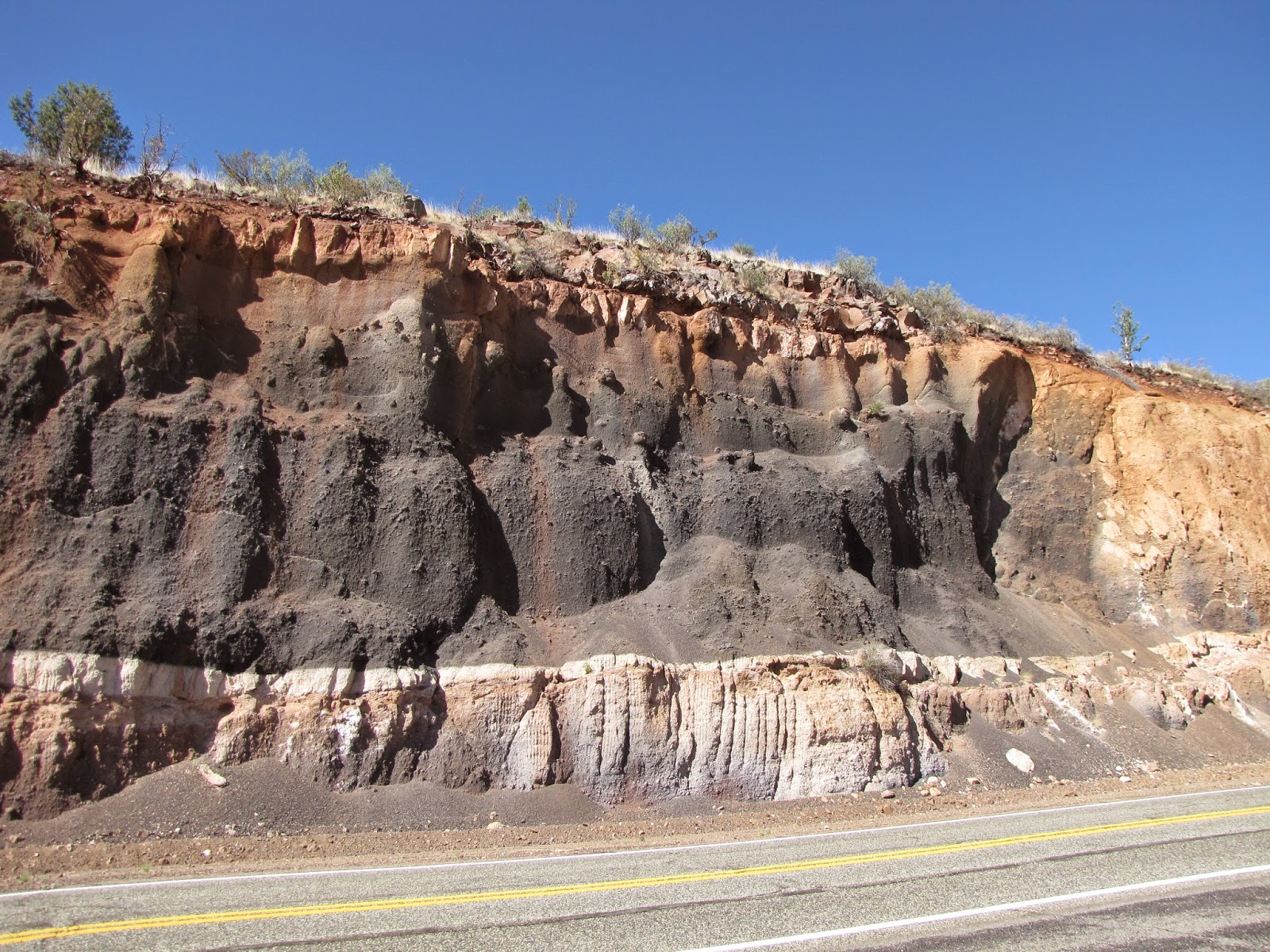 Terra Incognita tends to be my favorite destination. I'm so happy when headed for some place I've never been before. And usually I don't have to go very far. Amazing how often we haven't fully explored the places near where we live.

Believe it or not, there are places here in Arizona that my wife Emily and I haven't seen before.

That could be reason enough,but we were getting into summer, and it was getting up past 100 degrees Fahrenheit. Funny how you can find yourself saying, “It's only going to be 104 today . . .” People stagger around the sun-blasted streets of Phoenix, brain-fried and zombie-eyed, babbling obscenities and committing acts of public defication. The desire to escape from the heat island is strong.

Plus Em is working on a post-Apocaypse novel, and part of it is set in Northwest Arizona along the south rim on the Grand Canyon.

Yeah, I know “they” keep saying you should write about what you know, but deciding to write about something you don't know can be a license to explore, to learn, to go out and have adventures. After all, adventure is what this is all about, and why should fictional caracters have all the fun? 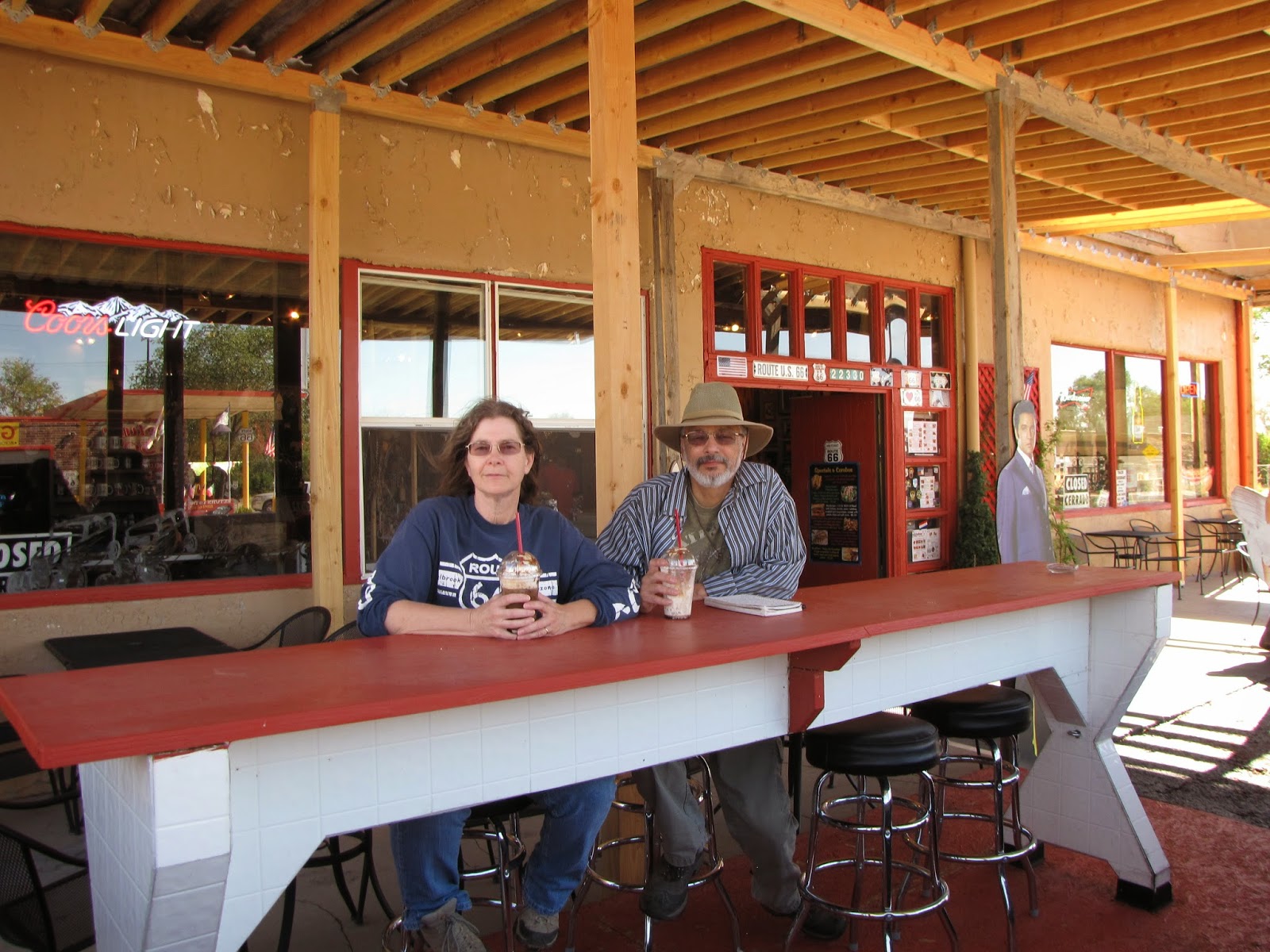 This would have to be more than just a day trip. We'd have to pull an overnighter. As soon as I got off from work, we got in the troque and headed north up I-17.

It got cooler. Funny how cool the ninties can feel after a few weeks over a hundred.

And suddenly . . . the wide open spaces . . . we relaxed, enjoyed the landscape.

This was still stuff we had seen before, and have gotten to know well, but we were out of our usual day-to-day routines, and clouds built up in the sky.

A faint rainbow made an appearance as we arrived in Flagstaff.

There were Ganesha seals over the doors of the office of our motel on Route 66. A lot of motels in the Southwest are run by people from India and Pakistan. The young men checking in ahead of us were from Germany. 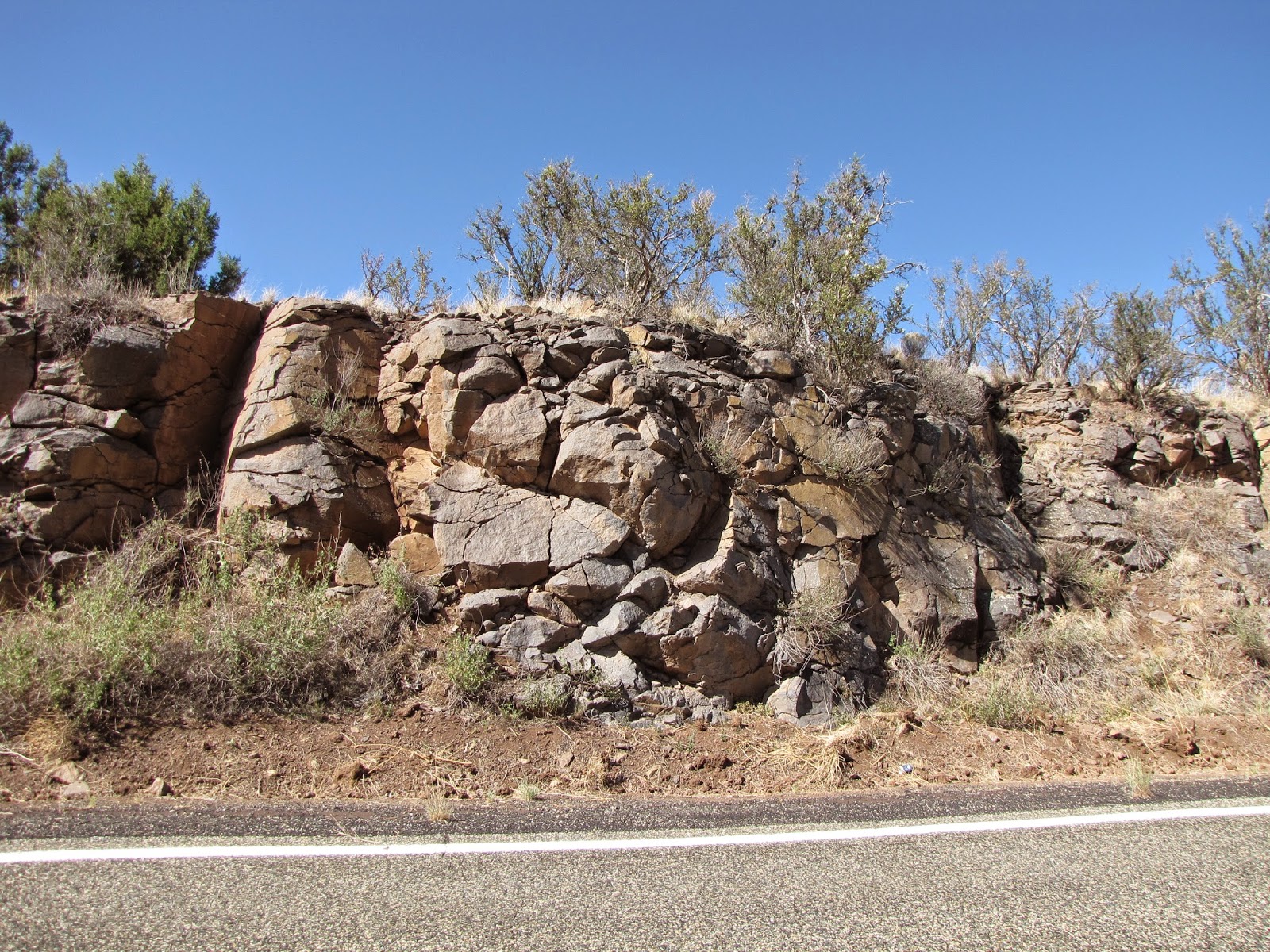 On Route 66 we ate dinner at the Galaxy Diner. Its chrome and neon, Hollywood and hot rod décor has become a home on the road for us. We ate real American food – Black Angus steak, mashed potatoes, corn on the cob – delivered by a seven-foot tall, blonde waitress.

The next morning was cool (at least for us) and clear. It was great to breathe something that wasn't piping hot smog. We headed off to the mysterious northwest, toward the volcanoes, getting back onto Route 66 – you can't do the whole Route as it was, the modern highway system chopped it up long ago – into juniper country through the charming little town of Ash Fork, that hasn't quite become a tourist spot.

Then we seemed to have stumbled into a time warp. Burma Shave signs dotted the roadside, with rhyming messages about safe driving. Looks like some organization did it as a public service and to bring part of the traditional Route 66 experience into this century.

That brought us to Seligman, which has more ambition to attracting tourists than Ash Fork, with colorful signs, shops, ancient automoblies on display, and mannikins being dressed up in Wild West regalia. 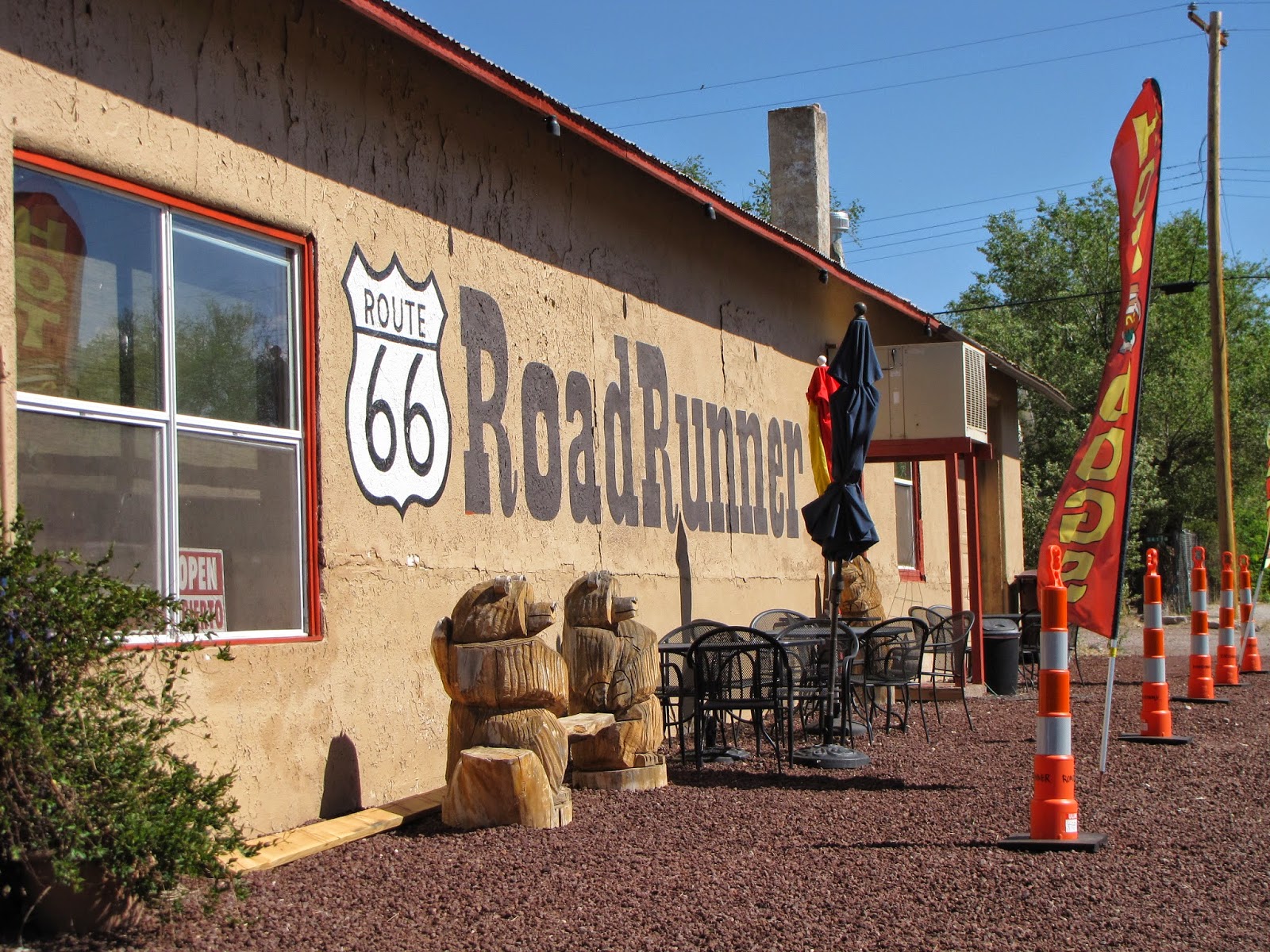 We stopped at Route 66 Roadrunner for fancy-schmancy coffees (the kind I only drink on the road). A local oldies station played David Bowie's Young Americans while cutouts of John Wayne and Marylin Monroe looked on. I kept saying “Excuse me, sir,” to a an Elvis cutout.

Across the street (actually the Route) a guy sang and played Beatles songs on his guitar. In this day and age, vintage British pop has become postmodern Americana.

We kept seeing bikers. A middle-aged, multiracial group – the word “gang” didn't seem to fit here. They did seem to fit into the landscape. Not out of place at all.

Soon we were on Indian Road 18, entering the Hulapai Reservation. The fire danger was HIGH. The road looked a little pre-Apocalypse, as a sign warned ROUGH ROAD. Once again, these were wide open spaces, not many people, mostly cows, and the one of the only other vehicles we saw was labled FEDERAL POLICE. 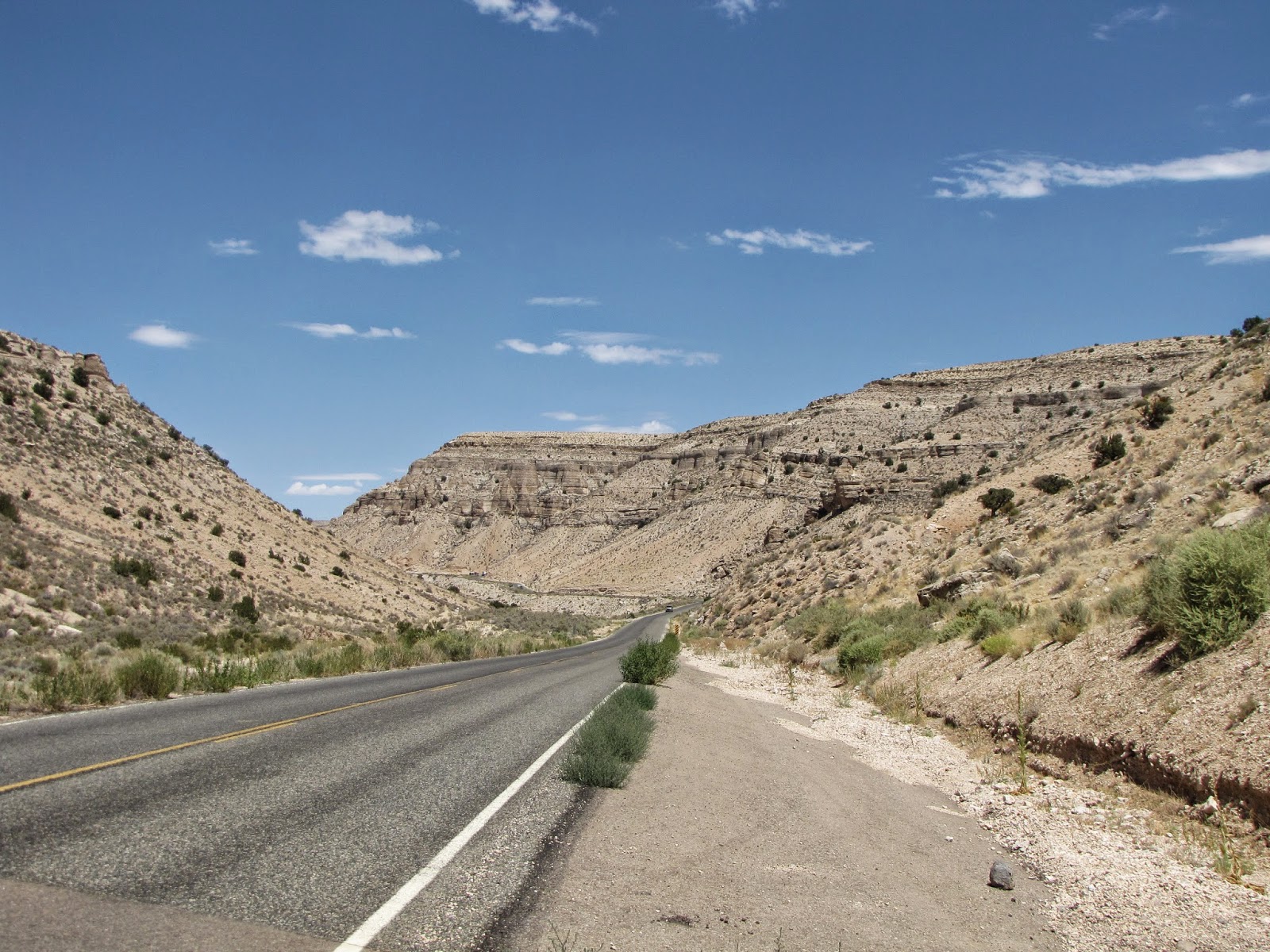 It got dryer and more deserty as we approached the Havasupai Reservartion. The road went from cracked pre-Apocalyptic to disintegrating post-Apocalyptic. We could soon see the Grand Canyon.

Eventually we reached the south rim. Havasupai were bringing horses in trailers. Datura plants without flowers grew in the parking lot.

I heard a helicopter, but couldn't see it. The problem was, I kept looking up, expecting to see it in the sky. This was the Grand Canyon. After a while, the helicopter came up from below the rim. 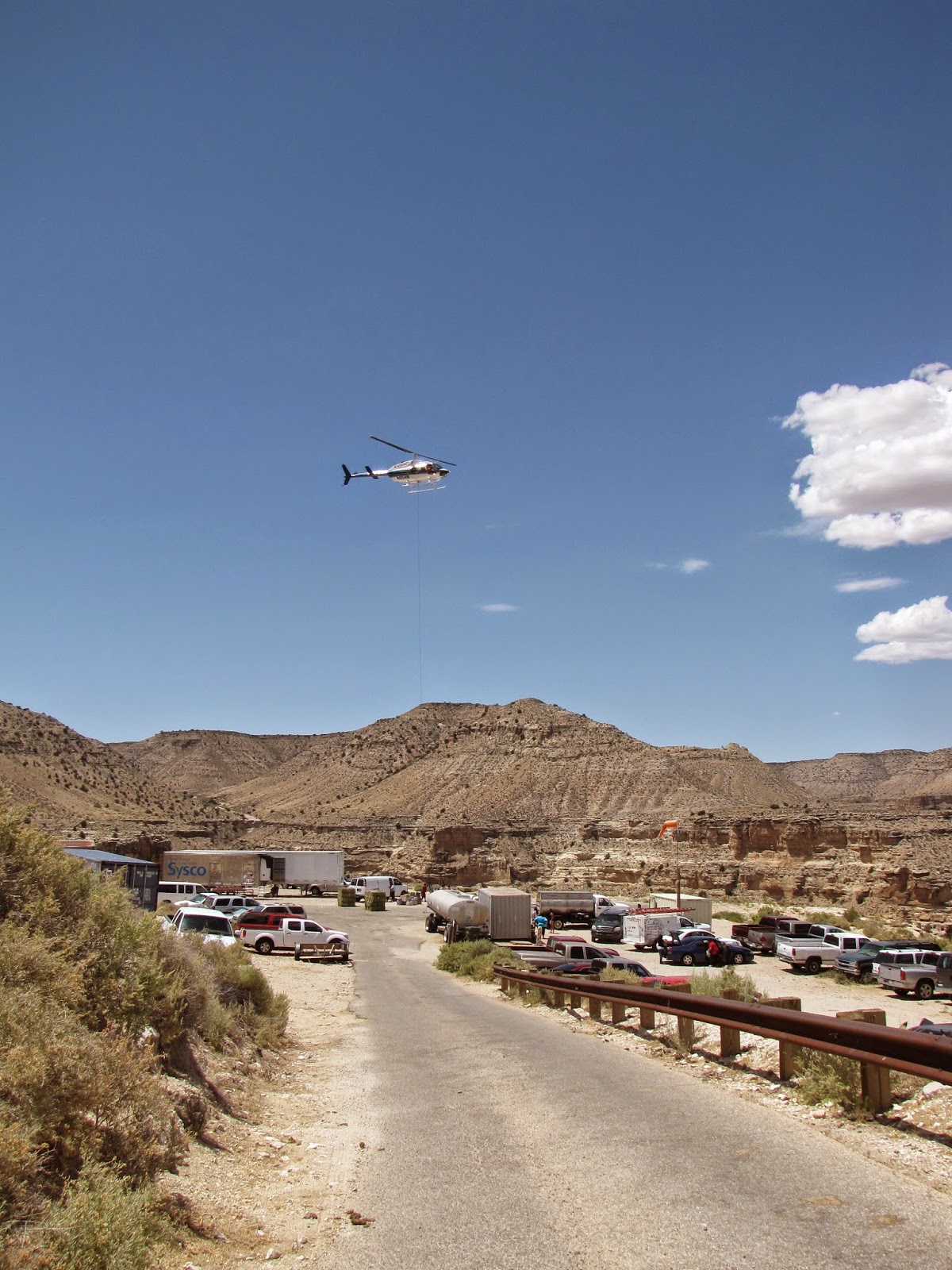 Havasupai loaded supplies that were hooked to a cable, and the helicopter took it to their community in the Canyon. They live in America, the rest of us live on it.

The windshield bug splats were bigger, nastier, and juicier on the way back. We had tacos at El Charro in Prescott, and went back home via US 89 instead of I-17.

The twisted, rocky hills were matched by the huge clouds, Em called them “cloud ships,” that filled the sky, getting thicker and darker. As we got closer to Phoenix they were stacked up around the heat island.

When the sun set, they closed in. There was a dust storm, a haboob. Then it cooled, and rained.