I could feel the missile close in on us. The chip saw to that. The very idea of the missile filled the chip with terminal info-lust.

Doc Burnout went into some serious evasive maneuvers that sent me, Obie, and the stun gun tumbling into the van's electronic inner coating. From the way the gadgets were complaining, it hurt them as much as it did us. The only thing in the vehicle that was having any fun was the Krell chip.

"It turns when I turn," said Doc, his voice growing high and trebly like a hysterical teenaged girl's, "I can't shake it."

"It must be targeting the electronic activity -- shut everything down!" said Obie, who had lost his glasses, but had gotten a grip on the passenger seat.

Meanwhile, the chip had me climbing the rear hatch, and focusing my eyes out the portholes when the missile appeared in them.

"It could damage the system," Doc whined.

"Would you rather die?" said Obie, recovering the stun gun, zapping a test spark.

"Life is so cruel," Doc said, flipping the cover off a big, red button, and pressing it with a shaky thumb.

All the van's electronics went dead in a slow flickering fade-out. Tears intermingled with sweat on Doc's quivering face.

Of course, I couldn't help but keep focusing my eyeballs on the missile's painted face as if it were a potential lover. It was too skinny and didn't have large enough breasts for me, but the Krell chip thought it was just wonderful. Too bad they'd have to go through not only the van, but my skull and brain to get together.

"Is it gone?" Doc asked, barely managing to keep the van from sliding offroad.

I couldn't say anything.

Obie looked out both portholes, and looked grim. "Naw," he said. "It's slowed down, but it's still locked on our ass. Are you sure you shut down all the electronics on this tank?"

"Yes," Doc said, "It was built back in the seventies for God's sake!"

"Then why the hell?" Obie said.

I managed to point a finger at my bandaged cranium, and croak out, "In here, it's after the chip," just before the damned thing had me kick open the rear hatch and jump out at the missile. 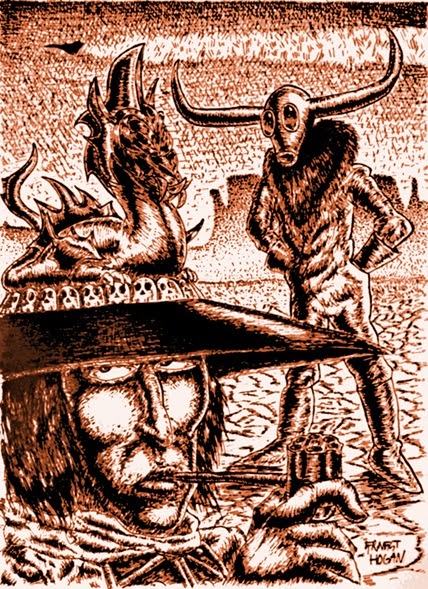