It was the most unnatural act I ever participated in: I embraced the missile with all my strength.  Obie flowed between the seats and into the space where a passenger's feet would go, and locked his bones into fetal position. Doc closed his eyes and breathlessly chanted, "Ohgodohgodohgod . . ." like he was trying to fake an orgasm.

The shark-faced mini-Cruise missile penetrated the van's cargo area, the rocket engine shut down, then, with the firing some cherry-bomb-like retrorockets that made Obie scream, "Driveby!" it settled in like shuttlecraft returning to the mothership.  For a few grotesquely elongated seconds, we all wondered if it was going to explode. Then there was tooth-splintering jolt.

Doc's closed-eyes driving had us up on a well-manicured lawn.

"Open your eyes, you fool!" screamed Obie. "You got us offroad!"

Doc opened up his baby blues, twisted the wheel, locked the brakes and threw the van into a turf-ripping circular skid on this lawn that was too well-kept up and too big to be anybody's front yard. Or at least the front yard of anybody who couldn't afford armed guards and flesh-eating Rotweillers.

I tried to worry about it. The centrifugal force from the skid wasn't quite enough to dislodge the missile from the van, or my scorched hands from the missile -- it looked like a spatula would be required to set me free. Meanwhile, the Krell chip was singing a high-pitched, high-speed love song to the missile's onboard software that was pureeing my brain.

And then one of the bandages peeled loose from my head.

When the van finally came to skeleton-rattling halt, the missile and I shot out like a projectile turd onto mutilated greenery. There were no barking Rotweillers, or guards clicking the safety off their assault-rifles. My hands, arms, and legs burned like terminal hemorrhoids wherever they touched the missile.

A putrid-smelling grey-green smoke issued from the entire surface of the missile. The painted-on Flying Tiger shark face peeled off and blew away. I wished the chip would let me let go of the burning mess so I could run.

"Good thing Papa Legba made you stop in time," Obie told Doc, "you could have destroyed it!"

"That would have been a shame," said Doc.

The van was inches from a structure that looked like a huge, mechanoid alien penis.

NEXT WEEK: CHURCH OF THE ALIEN PENIS 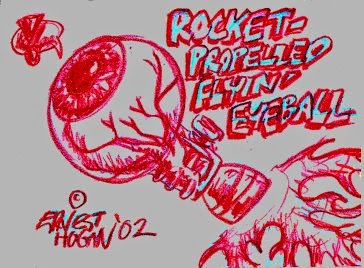