Being zapped by the stun gun and cattle prod had its bright sides: First, if your body has been hijacked by diabolical chip in your head, the electric jolt gives a few seconds of relief. Then, your disrupted nervous system overloads, and all the pain from any recent unwanted surgery fades down to a manageable level. Of course, you can't fight back, and have to let the thugs do whatever they want to you, but I was beginning to accept that this was all an essential part of life with the Krell chip.

There was something familiar about these two thugs. One was either a failed Hemingway or a Phil Dick lookalike (depending on how old you are) even though the earring and the slightly effeminate manner spoiled the effect. The other looked like a serious young, bespectacled African American scholar, until you noticed that at the points of his cheekbones there were tiny "x"-shaped scars ("Scarification, man," he explains, "the brothers in Dallas are really getting into it").  They were Doc Burnout, and Obeah X15, two sorta-friends of mine.

As they tossed me into the back of the van, I found that I could talk:

"Hey, I thought you guys couldn't stand each other."

"Shit happens," Doc said as he got behind the wheel and started the engine.

"And this is really big," said Obie, sitting down next to me, stun gun in hand.

Suddenly, the chip had me trying to get up and leap out of the rear porthole. Obie stopped me with a quick zap.

"Can't talk here," Doc said, pointing to a funky electronic display that was where a radio, cassette, or CD-player would have been in a sane person's van, "we're being monitored."

Could someone operate sophisticated electronic equipment while wearing a saguaro suit? My mind boggled. The chip buzzed.

"We have to find a safe zone," said Obie.

The chip took hold of me again, but luckily Obie got me with the stun gun before I could climb out the porthole.

Then the van's electronics has a seizure. Out of the porthole I saw what looked like a miniature Cruise missile decorated with the World War Two Flying Tigers' shark eyes and mouth. It looked mean and was catching up with us. 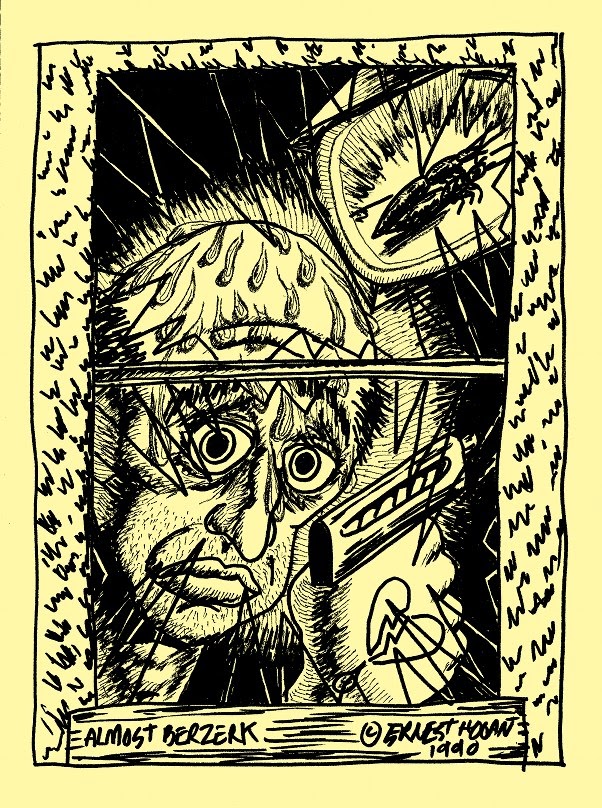