"I have you covered," the saguaro said shaking the TEK-9, just in case we hadn't noticed it. A cellular phone then grew out of its other arm as it said, "Send a mobile unit to . . ."

Then a huge lizard -- it looked like a monitor, but was the size of a Doberman pincher -- leaped off the Alien Penis, onto the saguaro.

The saguaro went, "AIIEEEEEE!" like in a comic book.

Before any of us could breathe sighs of relief, the hiss of several more big lizards made us look around. They were coming at us, their shadows growing longer as the sun set.

Doc, Obie and I fell over each other as we scrambled back into the van.

"Gimme the keys," said Obie, who was in the driver's seat.

A lizard clawed its way into the rear hatch. I kicked it in the jaw and screamed, "SOMEBODY drive!  Now!"

Doc pouted, swallowed a squeak, and handed the keys to Obie, who had us jolting across the lawn in record time. The lizard let go of the rear bumper. I grabbed a cabinet that held some sophisticated electronics before I could be ejected.

"What's with all these oversized lizards?" I screamed as we bounced over the curb, into the street.

"Like I always said," Obie went on, "it's televoodooizing time here in the final act of the 20th century.  People all over the world are force-feeding lizards with protein-rich reptile chow spiked with stuff like pituitary gland of pit bulls in an attempt to get the critters to reach their as yet unrealized maximum capacity. I've been investigating it, and it's getting heavy. I got some video off a satellite feed from Indonesia of these Komodo dragons that looked like Godzilla."

"What?" I said.  The bandages were now all swinging loose about my head.

"It's an experiment in chaos ecology and the revival of reptile-friendly religions," Obie said, stopping for a red light.

"Well," Doc said with his characteristic limp-wristed hand-swish, "if you boys think you've had a rough day . . ."

The bandages were just about ready to let go.  I couldn't wait.  I took hold and ripped them off all at once.  It only hurt a little bit.

Doc and Obie looked back at me and screamed.

NEXT: THE FACE OF THINGS TO COME 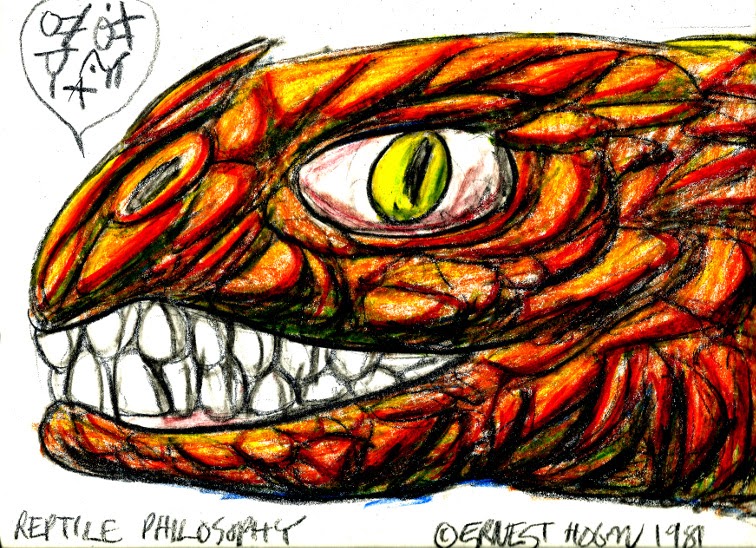