My body refused to obey any command. When Vampiko bounced by, ready to go to work at the tittie bar, I couldn't check her out. That hurt.

"Flash, you've taken channel surfing to a new dimension." she said, then gave me a tonsil-tickler kiss -- and I couldn't take my eyes off the screen. "Well, the least you could do is sit down."

I tried. After a while I managed to make my knees wobble.

With great effort, I could say, "Naw. Can't move."

"Oh dear," she said, helping me onto the couch, "you must be really hurt under those bandages. Sacre-bleu! I wish I could stay, but the sun is going down, and it's time for my shift at Global Delights." She kissed me again, I responded a little.

The blood drained from my button finger, I fell asleep, or into a sort of trance. The chip didn't need my attention to suck up the information. Deep down inside, I was screaming.

Then a crudely animated cockroach -- like the ones on the library computer -- walked across the screen.

The chip then reminded me that in the last twenty minutes four news stories had flashed before my eyes about the Kafka virus -- first it fills a computer with electronic cockroaches, then all memory blanks. There's also a rumor that one user who turned his computer off before the cockroaches could do their thing somehow was transformed into a giant cockroach. A sound byte of a hysterical little girl describing her encounter with the giant insect was offered as proof.

Suddenly, a strange buzzing filled my head. I popped up off the couch, dropped the remote without bothering to turn the set off, and headed out the door. Something was calling the chip, and it was using my body as a vehicle. I was lucky that I got the door open before crashing through it.

The spectacular Phoenix sun blinded me as I stumbled my way through the maze of the Big Ugly Peach Apartments West complex. Nobody noticed me except for a lizard the size of a pit-bull and a saguaro that made a quick call on its cellular phone and disappeared.

I was weaving through the ring of parking lots when an ancient primer-gray Chevy van came to a screeching halt within splitting distance of me. Two guys leaped out, and began working me over with a stun gun and a cattle prod. 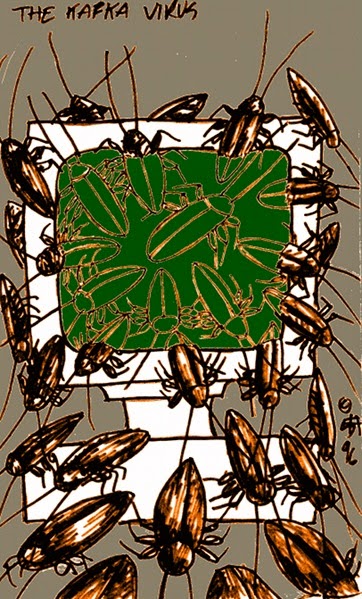