SUNNY-SIDE UP THROUGH ANOTHER APOCALYPSE


I scare people when I talk about the future. I don't mean to. It's just that I like to let my imagination go wild, and my daring feats of the imagination tend to go out of bounds.

Also, most people really don't think about the future much. They have some vague ideas gleaned from their media absorption: the shinny utopia, the oppressive dystopia, the post-apocalyptic nightmare. All rather cliché. All vague and disconnected from everyday life.

That's probably why so much of “science fiction” is unimaginative, light-weight “escapist” fare. And the “escapists” are usually scared to death of truly escaping their humdrum lives.

I've come to recognize the look of terror when I describe some new idea that I've Frankenstein'd together out of the wonderful weirdness that I'm always scanning for. And their reactions:

“But I want it to be like Star Trek!”

“What will I do if I'm not oppressed into submission by a Big Brother society?”

“That's not what it says in the Book of Revelations!”

It's always dangerous to come up with a new vision of the future, even when you're presenting them to science fiction fans.

Maybe especially, with science fiction fans. You have to watch out when you think you know the future. The future has this tendency not to be whatever you're expecting. 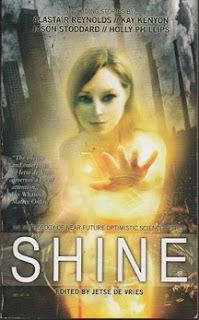 So, when Jetse de Vries asked if I could write an optimistic near-future story for his Shine anthology, I wasn't sure what to do.

I consider myself an optimist. As a child of the Atomic Age I've been through apocalyptic times over and over. The doomsayers are always wrong.The future is never easy, but keeps getting weirder and more wonderful.

Still, I wasn't sure what to do. So I pulled Victor Theremin out of my subconsciousness and threw him at the problem. I came up with a story in which he talks an older science fiction writer out of committing suicide. I wasn't sure if it hit the mark. Jetse didn't buy it for Shine, but did buy it for the DayBreak Magazine.

When I read Shine on a road trip on which I saw both utopian and dystopian developments in the Southwest, I realized that – gasp! – I'm now the writer from an older generation. These new writers are young, they work in information technology. The have fresh, new, optimistic visions of the future because they've lived in the future all their lives. They aren't afraid of tackling the problem of how do we get there from here, because they have no choice.

It is also the first truly global science fiction anthology. Jetse used the Internet in an ingenious way to cast his net for stories planetwide. The introductory material is just as interesting as the stories.

“Twittering the Stars,” by Mari Ness, is written as tweets and can be read forward or backwards – a hard science tale that outdoes most of the old New Wave experiments.

“At Budokan,” by Alistair Reynolds, was badass and damn close to my personal Holy Grail of science fiction that makes people want to get up and dance.

“Sarging Rasmussen: A Report (by Organic),” by Gord Sellar, thrusts you into a new world with new languages beyond cyberpunk.

I was impressed. But then this book isn't for old Atomic Age babies like me, it's for the new generation of readers, who probably will be bowled over.

And as I struggle for survival in the year 2010, I will look forward to a wild and wacky future, and I'm getting the urge to re-read Shine.