THE AFTER SCHOOL EXORCISM OF SHRIMPENSTEIN 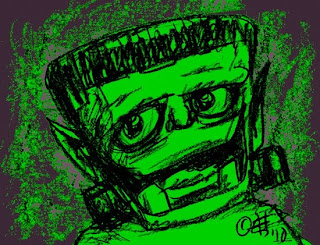 Children's television was different when I was a kid back in the days of LSD and napalm. It was rough, primitive -- no one knew what it was supposed to be, except to grab young brains and download the lust for sugar, and plastic in bright colors and funky shapes. It was the sort of sleep of reason that Goya said produces monsters, and in this case, created Shrimpenstein, the weirdest kid's show to violate the air waves.

It seemed harmless at first, another after school program with a costumed host on a cheap set with a crew of puppets that provided filler between the cartoons and commercials. Doctor Von Schtick, Shrimpenstein (or Shrimpy), and some friendly creatures frolicked in a laboratory. Nothing for child psychologists and parents' groups to worry about.

Only this was the Sixties. The world was in turmoil: war in Vietnam, riots on the streets and campuses, drugs, rock and roll, even sex, were all swirling around in the air with the signal from KHJ-TV channel 9 in Los Angeles. No matter how the adults tried to protect us from it all, we kids were aware. And our official role models didn't seem to know how to explain things.

Something happened when the electronic media voodoo brought Shrimpenstein to life, and it wasn't the age-appropriate tale of jelly beans dropped into a Frankenstein machine that the theme song claimed (I guess telling of the Doctor stitching together the stolen body parts of dead children would have been too much). Like a ghede, Shrimpy had the ability to tell truths that needed to be told, but weren't socially acceptable.

“Shrimpy, I have plenty of books around here that you can read.”

“So why do you keep them on a high shelf where I can't reach them?”

And we all knew about the books – and magazines – on the high shelf, or the hidden drawer.

I also wonder what the Hormel company thought of Wilfred the Wiener Wolf throwing clawfuls of their product across the set?

And then there was the Tijuana Bats – an East L.A. version of Alvin and the Chipmunks with a vato loco attitude.

I fondly remember the Doctor saying, “There you are, glued to your television sets when you could be out doing something constructive – like blowing up a building!” This was about a year before the Weather Underground, and decades before Al Qaeda.

Even the cartoons were different:

Not the slick corporate coolness of today's Marvel, back then comic books and superheroes were considered harmful for proper development of law-abiding citizens. Which was part of the fun.

When Shrimpenstein talked, the fact that the world was going crazy made sense. What a perverse relief – and a perverse release – it was!

But it wasn't to last. This sort of joyous anarchy never does. I remember overhearing parents and teachers dissing Shrimpy. One day, fake newspapers with headlines about someone being fired were plastered all over the laboratory. The Doctor went crazy, and at end of show he knocked over the walls of the set. As the credits rolled over him, he screamed, “They're the ones who are responsible! Blame them!” It was like all those movies about mad scientists – my real role models.

For a brief moment, reality and fantasy were one . . .

The next episode had Shrimpy finding a note from the doctor, explaining that he was on an expedition in Africa. Then a giant knife-switch was thrown. After a bright, smoky explosion, Shrimpenstein looked less demonic. His voice was also higher, and he talked like he was made of jelly beans.

I stopped watching. The show didn't last much longer.