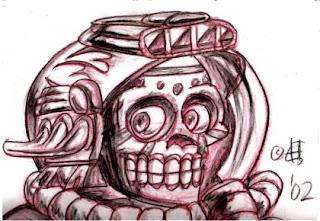 I've got another Chicanonautica over at La Bloga. This time it's all about the Halloween/Día los Muertos cultural cross-fertilization. Here are some extras:

“Come with us now to a land where unspeakable monsters roam, and terror is the order of the day. You have sixty seconds to prepare yourself . . .” Then they would cut to a commercial.

That's how Chiller on KTTV Channel 11 in L.A. would begin. What diabolical genius came up with that? Once it was followed by a horror movie based on a Carlos Fuentes novel.

The issue of chupacabra, the Anglicization versus the the proper Spanish chupacabras came up. Google prefers the no “s” version, so that's why I'm going with it.

I do a lot of my recomboculturalizationizing -- so here, I'm giving a nod to tradition, first with José Guadalupe Posada:

Then there's the matter of La Catrina, the skeletal lady in the feathered hat, created by Posada. Later Diego Rivera gave her the skeletal Quetzalcoatl boa:

Lately she stands in for La Lloroña, the preColumbian goddesses, and the new manifestation, Santa Muerte:

But here's a new tradition of the megaofrenda:

Who knows where it will lead?

I'll leave you with an example of what happens when Mexican tradition gets covered in layers of American-style exploitation: