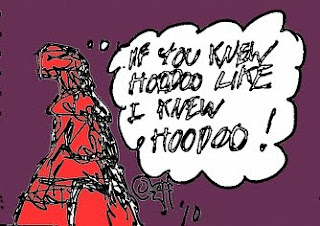 Hoodoos -- according to the Free Dictionary, “a column of weathered and unusually shaped rock” -- abound in Bryce Canyon. The imagination breathes life into them. You can’t help but see faces, what Joan Míro would have called “personnages,” the Legend People, or To-when-an-ung-wa, who, according to the Paiute, were turned to stone by Coyote because the were bad.

Even in this desert that hasn’t been an ocean for millions of years, there is an Atlantis myth. This articulated landscape reminds you that others came before you, and the world was not always the way you know it.

Stepping around piles of fresh manure, we hiked through towers of Petra-like cities carved by the architecture of the crumbling planet. Traces of late Spring snow demonstrated the ancient process, still in action -- tiny, temporary rivers and waterfalls trickle down, carving the sandstone as blasts of rain/snow/hail sting my face, trying to sculpt me.

Am I up to another transformation? Do I have a choice?

The impression of a fabulous urban ruin was noted in the 1880 Dutton report, quoted in the Visitor Center: “The resemblances to strict architectural forms are often startling” suggesting “the work or giant hands, a race of genii once rearing temples of rock, but now chained up in a spell of enchantment, while their structures are falling in ruins through centuries of decay.”

Others have been sent into delirious fantasies like my own by these amazing chunks of rock. How many centuries has this been going on? Did sorcerers live and do magic here, among stone sentinels, beasts, guardians -- and even a giant sewing machine?

Words fail me here. I’ll have to explain in Max Ernst-type drawings that I’l have to embellish in the computer to come near to the full effect. Still it’s not the same as being there.

Would it be possible to create an artificial process to sculpt hoodoos? Could I find materials that could be molded as multi-layered witch’s brew that could be worked with fire-hose and sand-blaster?

Some of these structures have holes that look like blue eyes when the sky shows through. What did people who saw them think when they finally met people with blue eyes?

At the bottom of the canyon, down the manure-peppered trails, an outhouse. Strange, how after all this incredible beauty, a simple utilitarian structure can be gorgeous. A full bladder can trump the eyes.

Back at the edge of the canyon, we saw an old man on a bench. He had an oxygen tank and a pizza. Emily and I hoped that decades from now, we would be able sit at such vistas, with oxygen tanks, pizzas, and incredible memories.

At the Bryce Canyon Mexican Restaurant, we ate tacos while the stuffed head of the Jackalope, that magic creature of Wild West roads, with its antlers and ears erect, watched. 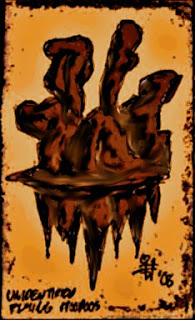