FROM TO MARS TO SHANGRI-LA IN ZION NATIONAL PARK 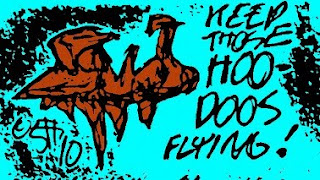 I may never make it to Mars, but I can always visit Utah. Zion National Park gets Martian right away, then takes you to unexpected places. Science fiction turns to fantasy, then to mythic reality. When you return home, everything is different.

Past the stone stairway, before the Zion Tunnel, I washed my hands in pink sand that melted away to nothing. This trail twisted through rock castles and cathedrals, and arches where invisible gods sat and observed like New World Buddhas.

In the park a quiet trail led to The Grotto -- then it became the Great Wall of China, twisting up Max Ernst mountains, up a Himalayan wind-tunnel, around a sharp, rocky corner that cut off the wind. There was an oasis in the sky, full of desert flowers, and a bridge built for adventurers.

Suddenly, we’re in a lost world, a landscape painted centuries ago by a Chinese master. Did we find a magic portal to Asia? Was that a yeti screaming? Or a teenager? Or a teenage yeti?

Is that the perfume of Shangri-La I smell? Is Shangri-La somewhere off the trail? But the trail is challenging. Going off it could prove deadly.

Somehow, all the switchbacks, up, down, and around these dancing mountains that we just have to do again when we reach the top do not do us in. We are energized by this place. Hearts pound, spirits rise as we return to America, and Planet Earth.

Back in Kanab, Utah’s Little Hollywood, we ate again at Huston’s Trail’s End.

This time we sat next to a half-sized statue of the famous “Trail’s End” image -- the sad Indian on horse, slumping with his spear, mourning the fate of his land and people. His braids stuck out, blown by a non-existent wind, which made them look like antennae. The Indian was taking on the aspect of a Martian. The process was happening long before Pixar started filming John Carter of Mars in Utah.

These antediluvian rocks cry out for transformation, which is still going on, only too slow for us mortals to notice.

On the way out I saw that they also sell toy six-guns with pretty, pink, plastic holsters. You too can be a postmodern cowgirl. Yippee-ay-yo-tai-yay, mijitas!

And I only saw one, lone, flowering datura plant beside the road today. They’re not really necessary in this mind-bending landscape.