Shortly after “Hindenburg’s Vimana Joyride” went online in DayBreak Magazine, I was back in Moab, Utah, checking in to the Inca Inn, where I set the beginning of the story. No nefarious self-promotion plan, it just happened, I swear. I did keep an eye out for Victor Theremin, or folks in grey suits and mirrorshades.

Not as much datura on Main Street this time, but it’s been a late Spring, and cruising to Island in the Sky in Canyonlands, taking in the Grand View, where you can almost see the curvature of the Earth, and the Colorado River twisting through a vast network of carved planet, was quite a high.

That night I dozed off to Samson Versus the Vampire Women on the university station’s Sci-Fi Friday. Santo by any other name still works his magic.

The next morning ravens watched over the Inca Inn’s parking lot.

Next door, just beyond the Hacienda restaurant, Em went into ecstasy at Lin Ottinger’s Rock & Fossil Shop where steampunkish mining equipment and a neon dinosaur loomed over geo-archaeo-paleological goodies. It’s a good thing our house is way the hell down in Arizona. 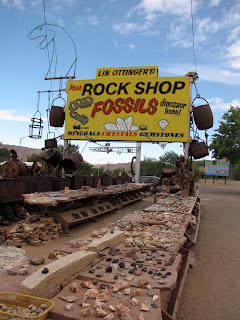 They also sold “uranium artifacts” -- archaeology of the Atomic Age. Maybe I should bring a geiger counter along next time.

And the Uranium Building had office space for rent. Just down the street from the datura mural at Eddie McStiff’s. 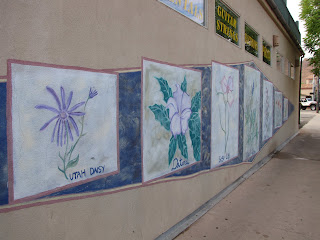 Big chain motels are moving in. At first we were afraid the giant metal Plumber Guy was displaced, but luckily he’s in front of a place that books rafting adventures -- he now wears a sporty eyeshade and carries a paddle. Fortunately, an arty sensibility, colorful paint, and the power for the fantastic mountains maintains Moab’s utopian atmosphere. Funkily decorated businesses where I would expect Victor Theremin and his interns and/or ex-wives to be partying or raising hell abound. 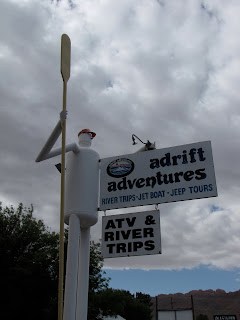 And further down Main Street/Highway 191 was a giant lizard in a straw hat and Hawaiian shirt wrapped around a gaudy sign for the Gonzo Inn. A green, scaly finger indicated that inn was not far off the main drag. Was Victor hiding out there? 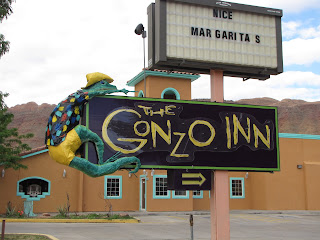 Moab is a town brimming over with character. Being the gateway to Canyonlands, it has to be, or fade into nonexistence. We drove through Arches National Park later that day, and even got caught in a sandstorm. Those rocks, even when flying into our faces, gave the gaudy little town serious competition.

In Moab, I finished Jetse De Vries’ Shine anthology and started Claude Lalumière’s collection Objects of Worship. The transition from new generation optimistic science fiction to phantasmagoric, delirious apocalyptic visions tossed my mind about. When you can read such things in a fantastic environment, you don’t need no stinking datura -- just perception and imagination.

As we loaded up the car, dust blew across the parking lot of the Inca Inn like an army of ghostly snakes. It made me feel optimistic and apocalyptic at the same time.

(The photos were by Em.)