SNEAKING BACK INTO KAFKAZONA THROUGH INDIAN COUNTRY 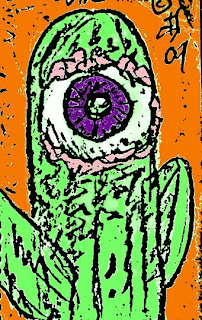 We left Utah as it was in the process of being transformed from John Wayne’s Texas to Pixar’s Mars. A few days earlier, we saw a red sign pointing to BARSOOM. Myths come to these wise old rocks to transform and regenerate. Santa Claus waited on his motorcycle. Soon tall, four-armed green vatos will be stirring up trouble, and restoring the cosmic balance as datura and cryptobiotic soil grows back.

We crossed into the Navajo Nation, where it overlaps into Arizona, made a pit stop at the Mexican Water Trading Post, then found ourselves in the middle of dust storm. At first, light hazy wisps blew across the road, then it got hairy, blotting out the sun, bringing visibility down to near zero. We had planned to revisit the Painted Desert, instead it flew past us, blasting the windshield.

I’ve got to use that experience in a future story set on Mars.

It was still blowing when we hit Holbrook, but it had calmed down by the next morning.

We weren’t far from the All-American intersection of Florida Street and Navajo Boulevard. An alley hid a lost kachina mural near a giant plastic kachina of the Pow Wow Trading Post. Across the street was Young’s Corral, with its murals of bikers and the ancient car culture.

This is where we saw a Navajo girl jogging down Route 66. She was heading for the future. I wonder what she was listening to on her iPod?

She was the antithesis of the “End of the Trail” drooping Indian that we kept seeing in restaurants, and motels. Originally a statue by James Earle Fraser, you can’t avoid seeing copies in two and three dimensions all over the roads of the Wild West.

A remarkable example was in the America’s Best Value Inn, in Tropic, Utah, painted by Lester Clarke: the Indian seems to be wearing a horned helmet, wonky perspective makes him gigantic, the ribs show on his horse, and they slump before what looks like a pre-historic sea.

But our trail -- or at least our trip -- had not ended. Between Holbrook and Showlow I saw more roadside datura, as a condor flew overhead.

In Show Low, the Maverick Gas Station is an attraction in itself. Slick murals decorate the walls of the luxuriant bathroom area, and are continued into the bathrooms: a panorama of hoodoos, condors, and petroglyphs worthy of a state-of-the-art theme park.

We passed through two Apache reservations on the way back to Phoenix. There I saw more roadside datura than I did in Utah. These were the biggest, healthiest plants I’ve ever seen.

There was a big, healthy plant with a dazzling array of flowers in one of the rest areas that Governor Brewer closed recently. And no fence or National Guard to protect us from this poisonous, hallucinogenic menace. But then, datura is part of this natural environment. It enforces its own laws.

Back home, I think about dystopian trends and have a good laugh.