We stayed at the America’s Best Value Inn of Tropic, Utah while exploring Bryce Canyon. I kept thinking, Tropic of Utah -- what a great title! It could be a Henry Miller tribute. An alien hides out among the tourists, amusing itself with seductions, and gets a Man In Black pregnant . . .

Oh yeah. I’m talking extraterrestrial alien . . . don’t want make a mistake, like I did back during our honeymoon in Sedona. At a restaurant, people were talking about how there’s a lot more alien activity in Arizona than in other states -- but after listening to their conversation, I learned that they had just come from a UFO conference in the Caribbean.

In Tropic I discovered that Utah is considering its own Arizona-style immigration law. Only this one would be “better” because it would give aliens a break if they rat-out others. The administration of my old high school offered the same deal to students caught with drugs, and it didn’t stop the football team from smoking dope.

They believe they have an alien problem in Utah. I’m not sure what kind of aliens they’re talking about.

Aside from a few fellow Latino tourists, the only brown faces I saw belonged to a bus boy and a handyman -- both of whom were busy taking care of businesses. But then, I wouldn’t want to accuse anybody of racial profiling. Besides, if it was ethnic cleansing they were up to, what were they going to do with all those copies of El Libro de Mormón?

Most of the aliens (beings from out of state) were tourists. A new breed of white, middle-aged, middle-class, Middle American motorcyclists tours the country in large gangs -- I mean groups. I saw lots of Europeans speaking a variety of languages, some of them worked in the motels. And then there was an Asian-looking guy with a Che Guevara T-shirt . . .

Clarke’s Restaurant seems to be designed to give tourists an “American” food experience. No heart-healthy, vegetarian fare here, just free pancakes if you’re staying at the Inn, meat & potatoes, and the Daily Special is: “Substitute fries for potato or potato salad.”

Local TV news looked like dispatches from another planet. You don’t see people so white in Arizona or California -- does melanin transfer through osmosis? And then there was a teenaged girl orgasmic over being able to perform for her prophet in a manner that I’m used to seeing reserved for the adoration of media celebrities. Could Nepal be any more exotic?

This added some sci-fi spice to my thoughts as I spotted datura growing in Escanlante along Highway 12, one of the most hallucinogenic drives on the planet. And then we went through Capitol Reef with boulders like dinosaur skulls, fossilized beach sand, remnants of ancient oceans, Get high on geology, not drugs, kids.

Then there were petroglyphs, marking the traditional migration routes. I was a space and time traveler, and an alien, as usual. 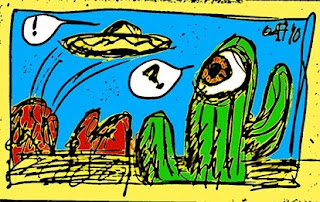