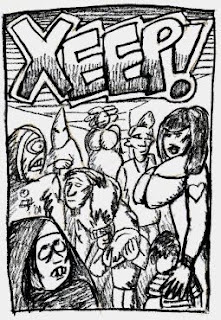 Our bookstores are dying. Not just the big box chains, the independents are also in trouble. Bookstores have always been a risky business.

People think of something that has been around for a generation as a natural phenomenon. I thought it about television. The current generation feels that way about the Internet. Bookstores as we know them seem like something that must have existed since the beginning of time.
It’s not true. Bookstores were something that didn’t come into my life until I was near my teens. I thought they were wonderful when I found them, but they weren’t where I was accustomed to getting my reading material.
In my early years, the Sixties, and Seventies, I found my books and magazines where my family bought everything else in the San Gabriel Valley, down the San Bernardino Freeway from L.A. – supermarkets, department stores, drug stores (I found Michael Moorcock’s The Final Programme in a Thrifty’s), and liquor stores. What I found in these venues was so much more interesting than what they were trying to force on me in school and at the library. These were bizarre magazines, gaudy paperbacks, and comic books – my happy alternative to children’s literature.
My favorite was George’s Liquor Store, on Francisquito Avenue, a short walk from my parent’s house. This walk crossed the border between "suburban" West Covina, and "barrio" Baldwin Park. Lots of people thought I was crazy for risking my life among the lowriders and graffiti.
But I remembered the day my mother got a letter announcing that our house that used to be in Baldwin Park was now in West Covina. I went out to discover that everything looked the same, and was disappointed. I learned an important lesson: that borders are arbitrary, and can change without notice. You shouldn’t be afraid to cross them, and you never know when they will cross you.
The magazine and book racks of George’s always challenged my developing sensibilities. Famous Monsters of Filmland, Creepy, and Vampirella were plopped next to second-rate girly mags. The comic book spinner was next to a paperback rack that mixed bestsellers from New York with soft porn books from local publishers. One glimpse of the cover of Ed Wood’s To Make a Homo, disturbed and haunted me for years. I was made aware that there were other worlds out there.
I also found science fiction magazines, Amazing, Fantastic, Galaxy, If, and other latter-day pulps that inspired me to become a writer. When one on slick paper appeared, I was eager to let my high school English teacher know about it. It was called Vertex and had a story that impressed me called "Bleeding Stones" by Harlan Ellison.
When Mrs. Goodman asked me where I found it, I told her. Looking disgusted, she repeated, "George’s Liquor Store?" She made it sound like the last place on Earth she’d want to go.
To this day, I don’t understand academics.
at 11:38 AM