NOT JUST ANY OLD BIG MACHINE 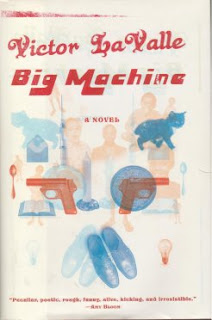 It was the cover of Victor LaValle’s Big Machine that caught my eye. Automatic pistols, cats, ghostly black people, and an array of objects dancing in a white background, under the red, swirly letters. It suggested hardboiled mayhem, but was so un-noir.

It’s the Twenty-First Century, folks. Noir is getting to be cliché. Black translated into French ain’t enough. We need more than darkness. How about some ultraviolet – the invisible light that makes the scorpions glow in the dark? Just a humble suggestion.

Anyway, the flaps and blurbs mentioned Hieronymus Bosch and paranormal investigations – could be kinda weird. Then I read a review that compared it to Ishmael Reed’s Mumbo Jumbo, which I consider to be one the great novels of the Twentieth Century. I ended up plunking down some hard-earned money for it.

It’s not the Mumbo Jumbo of our century – we’ll be lucky if we see such a thing – but I was not disappointed. The range of traditions that LaValle draws upon include Ishmael Reed, Chester Himes, Octavia Butler, and Philip K. Dick. He admits to being a horror fan, uses a quote from John Carpenter’s The Thing as an epigram, and lists Shirley Jackson, T.E.D. Klein, Stephen King, and “my man” Ambrose Bierce as influences. He’s not your typical African American writer, and this book will probably not become an Oprah selection.

Big Machine is the story of Ricky Rice, an ex-junkie janitor, who was raised in a cult that is truly bizarre but disturbingly believable. He is recruited into a group of psychic investigators, because he can hear The Voice. He is drawn into the wars between secret societies that include the one he grew up in. The story tears back and forth through time, revealing him and his world in startling, jagged chunks like brutal time-travel. And where it ends up is far beyond, and more fantastic than I was hoping for. Fans of the science fiction/fantasy/horror megagenre will enjoy the mindblowing conclusion.

The “paranormal” entities in the book are truly something different, have the texture of reality, and stand out in this age of cheap fantasy media overload.

Part of me wonders why Will Smith and Denzel Washington aren’t fighting over the movie rights, but this book digs deep into heroin, race, religion, politics, and other specters that are haunting Twenty-First Century America. It’s scary in a way that “horror” loving pop culture will have a hard time cozying up to. Which makes it a better book, and one to look out for.
at 2:16 PM