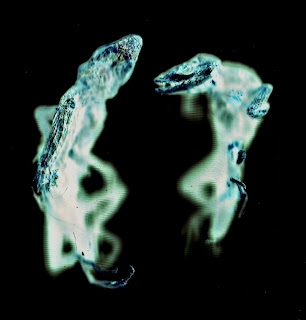 I was worried about El Cucuy (and I don’t mean the morning disk jockey). Here we are in the Third Millennium, with the Internet and all kinds of hand-held and wearable gizmos that bring you information from all over the world, usually from some multinational corporation. How can a funky little bit o’ folklore – essentially a Hispanic version of the Boogieman – survive when he’s competing with video games and Hollywood productions?
For those of you who haven’t heard of him, El Cucuy is one of the things that Hispanic parents, especially in the Southwest/Aztlán, tell their children lurks in the dark of night, that will carry them away, “never to be seen again,” if they don’t get back in the house when the sun goes down. Like the Argentine gnomes, he comes out of the duende tradition, of gnomish creatures, that Spain spread throughout the New World along with the Catholic Church, the Spanish language, and spicy foods. Only El Cucuy doesn’t look like a cute little gnome with pointy hat.
The strange thing is, nobody seems to know what El Cucuy looks like. Since over the last several decades, Hispanic culture has been . . . let’s say “undocumented” in Norteamerica, no official version of the story exists, just parents giving a warning and kids imaginations going wild. The result is an unclear, faceless image and a name that, when properly pronouced (coo-COO-ee) with a Spanish accent, sends chills down the spine.
I did hear one detailed description, from one of my cousins. He grew pale and his eyes glazed over when he said it, as if he were describing an actual, traumatic experience. “He’s a man! But he’s got eyes – eyes all over his face! And he doesn’t have any arms – just legs! Lots and lots of legs! And he grabs you with his legs and takes you away!”
Great stuff, but can it survive in the Information Age? A bit of searching on Google and Youtube revealed that El Cucuy is alive and well and living online!
The above shows El Cucuy in his natural habitat – kids speculating about him. It’s pretty close to the kind of conversation that produced my cousin’s fantastic description.
With this one, a Hispanic student (with a British accent!), documents the spread of El Cucuy out of his usual territory.
Folklore is spreading and mutating through the new communications media like viruses. Ethnic monsters are escaping their ghettoes, and wandering the Earth in new ways. Children of the night, what music do they make! Be on the lookout when the sun goes down.
at 11:34 AM