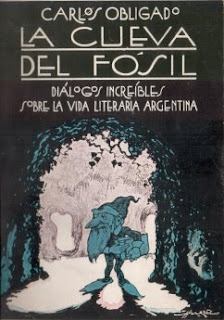 I never thought much about gnomes, the little men in pointed hats that are used to decorate tacky gardens and who star in TV commercials. I never imagined that people could be afraid of them. Though apparently, this is the case in Argentina.
There is folklore about gnomes there. People see them – especially children. This is something that goes back for generations. Like UFOs or Bigfoot in our culture, there are sightings, close encounters, even videos.
It’s possible that it’s a spinoff from the Hispanic tradition of the duende – gnomish beings with a boogeyman-like reputation that spread across what was once the Spanish Empire. Out of New Mexico, throughout the Southwest/Aztlán, children live in dread of El Cucuy when the sun goes down, but El Cucuy doesn’t wear pointy hats.
In his 1927 book La Cueva del Fósil: Diálogos Increíbles sobre la Vida Literaria Argentina (“The Cave of the Fossil: Incredible Dialogues on Argentine Literary Life”), Carlos Obligado tells of finding a gnome in his library in the middle of the night. In the first chapter the gnome introduces himself as “Rahim” (an Arab gnome?), and explains that gnomes have a network of tunnels all over the world. They like to sneak into people libraries and “borrow” books.
Does Homeland Security know about this?
And is that why I had trouble finding my copy of Thor Heyerdahl’s Early Man and the Ocean this morning?
In the rest of Cueva del Fósil, Obligado and Rahim discuss the works of the poet Leopoldo Lugones and Argentine literary traditon. Obligado seems to be an Argentine precursor to Paul Riddell. But why use a gnome to present satirical literary criticism?
There probably is nothing to worry about. What could gnomes do to you, except carry you off to their underground homeland, never to return? And how many of them would it take to carry off a grownup or child?
Besides, they look so silly, pointy hats and all. The video of one terrorizing children looks like someone in a team mascot outfit.
It was put online by the British newspaper The Sun, with its reputation for sleaze. Some people have even made videos making fun of the whole business.
But still, why do perfectly rational, “civilized” people feel compelled to put effigies of gnomes in their gardens?
Why do such ancient archetypes persist into modern times?
And where is that book I was going to quote from?
at 6:53 PM