ALL QUIET AT THE LEPRECON FRONT

The whole Borders/work situation really beat me up the last few months. I'm still recovering. On a good day, I look around, saying, “I could have sworn I had a writing career stashed around here somewhere,” and “It seems I used to be an artist . . what was that about it?”

As the desert warms up, I'm feeling better, even felt up to playing the part of a writer at LepreCon. Em was busy, not just with her job, but studying for a chemistry exam. So,off I went on my own, in the troque, down the freeways, across the artificial lake, to downtown Tempe, not far from Arizona State Univerisity. I didn't know what to expect.

Eager wannabe writers showed up at two in the afternoon on Friday for the “How to Write Action Scenes” panel. Most of them were female. A lot of them took notes. They got advice on how to write the sort of commercial fiction that hasn't been selling much lately – at the Borders liquidation sale, these books didn't start moving until the discounts got up to 70%off.

No one showed up for the “The Great Downfall (of Borders)” panel. A young woman came in the door, but just wanted water. Then an old lady peeked in the window . . . So much for this hot topic. 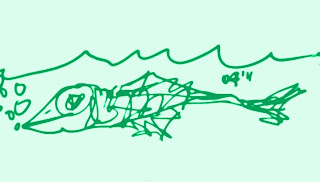 The panel on Arizona geology went well thanks to an enthusiastic audience and knowledgable participants – I moderated and provided comic relief.

The “ancient, prehistoric” science fiction panel went well, again thanks to the audience and bookseller Marty Massoglia. I played the role of comedic sidekick.

I also met with some writers:

Rick Novy says that not many of you folks are buying 2020 Visions, so to inspire you to order a copy now, here's the opening scene of my story Radiation is Groovy, Kill the Pigs:

A video clip from an unidentified source:

Aerial view of mountains in a desert area much like that on both sides of the US/Mexican border. The camera flies over an area of thick vegetation. Zoom in. It is an illegal marijuana farm. Bombs are dropped. The plants burst into flames.

Still burning, they begin to walk.

There it is folks! Science fiction! Buy it! Read it! Live it!

There are also stories by my wife Emily Devenport, Rick Novy, Jack Mangan (who was at the convention playing master of ceremonies at Meet the Pros), and many other who are are too numerous to list here.

Do it now! You don't want to have to answer to Victor Theremin, don't you?

I also met the New Mexico writer, David J. Corwell y Chávez, and we discussed La Llorona and how her domain is beginning to extend beyond the Southwest.

Over all, it was a quiet convention, which was alright by me. I wasn't up to the a lot of mind-blowing excitement. I needed to touch base with kindred spirits, and get a clue or two about what the hell I'm going to do about this crazy creative business that keeps taking over my life.

As I sat the patio, occasional people dressed in pirate and steampunk costumes passed. As I wandered the halls, it was hard to tell that anything, much less a science fiction convention, was going on.

Maybe it's getting too quiet. Maybe science fiction needs a desperate shaking up . . .

I contemplated future creative activities as I drove past buses that flashed VENUS and MERCURY on their destination signs. 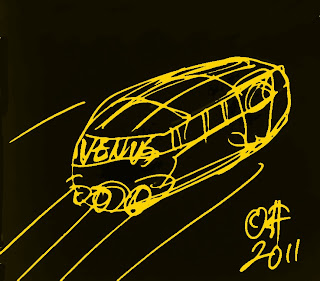