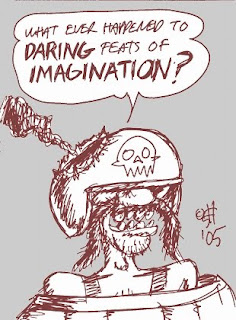 It's about time I got a chance to have my say about all this! First, don't believe anything that Ernest Hogan writes about me! The guy's a freaking mythomaniac. Leave him alone for few seconds and he starts confabulating. No need for drugs or anything – it's pure, nonstop brain dysfunction.

Especially right now, what with the election, his selling that story to Analog, and the fact that “Radiation is Groovy, Kill the Pigs” is about to see print -- that twisted gray matter of his is blazing with a firestorm that has him sitting around with a weird smirk on his face as he watches videos of bullfights and riots. It'll probably just get worse when 2020 Visions (edited by Rick Novy) comes out on November 15th. Who know's what vile literary abominations will result from this . . .

They will probably bear a certain resemblance to “Radiation is Groovy, Kill the Pigs,” which is the most outrageous atrocity committed in the name of science fiction that I've ever read. Worse, Ernest wrote me into the story, making me look like an even crazier nutjob than he is! And his depiction of our friend, Edgar Rice Harrison, can only be described as criminal – once people read it, I don't know how Eddie will be able to continue his legitimate research into the possibility that seeds of the man-eating tree of Madagascar have been smuggled into the United States.

Radioactive marijuana, neurotic artificial intelligences, multimedia countercultural art/crime events, and Chicano characters that are the polar opposite of proper role models . . . How does he think he can get away with this? I have spy cam video of camouflaged dacoits with blowguns in the trees around his compound – who knows what those darts are dipped in? And how could he smile like that during these troubled times?

Don't get me wrong. You should buy and read 2020 Visions. It has a wonderful story by Ernest's lovely wife, Emily (why she ever married him, I don't know) ,and other insightful speculations of the near-future by David Lee Summers, Jack Mangan, David Boop, Gareth L. Powell, David Gerrold, and others. It's the sort of science fiction we need, and haven't seen enough of lately.

But you probably shouldn't read “Radiation is Groovy, Kill the Pigs” – as if anybody would want to read anything with a ridiculous title like that anyway. It you do find your eyeballs snagged by that despicable construction of words, don't believe it – especially the stuff about me.

I would report Ernest to the authorities, if there were any that I recognized or trusted.

Victor Theremin has been compared to Kilgore Trout and Raoul Duke. The world awaits his novel Let 'em Suck Supernovas!, but he keeps running around the world getting into trouble instead of finishing it.