A REPORT FROM ANOTHER NEW FRONTIER 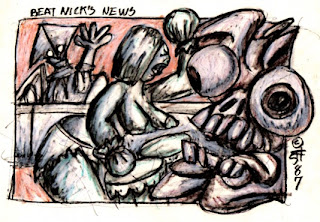 I'm experiencing time dilation. The last few months seems like years. And now, here I am, in a new world and a new job, with new situations coming at me. Once again I'm crossing another border, entering a new frontier.

When I was young, I wanted to be an explorer. Some diabolical gods granted my wish.

So now I'm in a rush to learn how to make a book into an ebook. With “Guerrilla Mural of A Siren's Song” coming out in Marty Halpern's Alien Contact in November, the time is ripe for Cortez on Jupiter to be released in the new format. Unfortunately, it's from my antediluvian (I wrote it back in the late Eighties), pre-computer days – I have to scan it, then go over it to correct all the glitches caused by the OCR process. Then there's getting it formatted . . .

Also, I'd like to put in some images. Another crash course I need to take. 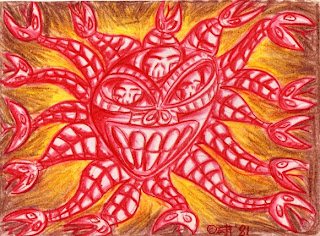 There's also some other deals pending, but I won't talk about them yet. I'm kind of superstitious about such things.

If this sounds like I'm complaining, I'm not. This is all making me happy. I'm merrily going over Cortez on Jupiter with Miles Davis' On the Corner (pure sonic science fiction) blasting through the house. The ravings of Pablo Cortez are inspiring me, as if I didn't write them – and making me feel twenty years younger.

I'm experiencing what are either delusions of grandeur, or a boost to my self-confidence.

If I can get Cortez on Jupiter ready as an ebook in the next few months, then why not shoot for doing Smoking Mirror Blues (which is already a computer file), in time for Día de los Muertos? And then I can scan High Aztech and have it ready for 2012, the end of the Mayan Calendar and the beginning of a new world.

Yeah, I really think I can do this. I feel good, and good things are happening -- like the other day, Emily was cleaning out a closet and found a box full of my artwork that I had either forgotten about, or thought I had lost.

There were also some Cortez on Jupiter drawings in that box.

Think I need thank some diabolical gods. And make some sacrifices . . . 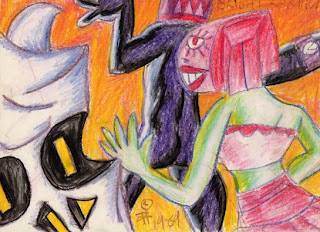