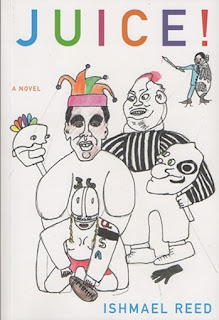 A new Ishmael Reed novel is out! People should be dancing in the streets! How come the media isn't covering this major cultural event? Hm . . . could there be something to this talk about the Jim Crow media?

Maybe everyone was just too busy with that earthquake/nuclear disaster in Japan, the Arab Spring revolutions, and the sputtering global economy. Maybe literature, or at least the audience for it, is dead.

Anyway, it's called Juice! And it's about O.J. Simpson.

Well, actually, no. O.J. never shows up a flesh & blood character in novel. We just get his media image, and a lot of opinions about him -- the way a lot Americans experience the sex symbols they're in love with.

It's actually about Paul Blessings (though most of the time he's called Bear) a diabetic African American cartoonist who becomes obsessed with O.J. Simpson, or rather that infamous media image. Bear and his world are a whole different universe than any stereotypes you see in contemporary entertainment and political discourse.

Reed also draws some of Bear's cartoons, blurring the line between literary and visual art, not to mention fiction and reality.

Bear's cartoons tend to be misunderstood. But the way things get misread as they go from one human being's self-expression to content for the brave new media seems to be the point of Juice! It's a novel of the Information Age -- or should that be Dysinformation Age? And it captures life in the online Twenty-First Century reality better than any other that I've read.

It's so easy to filter out opinions you disagree with, and surround yourself with material that backs up your preconceived notions. You feel happy and secure. But sooner of later, reality bites you in the ass.

And don't expect Juice! to stick to any party line. This is trickster stuff. NeoHooDooism is alive and well. We get an alternative universe with left-leaning TV network that is like a combination of PBS and NPR that is criticized for it's racism. The way cartoon characters and celebrities can become more real than actual humans is demonstrated. This is an expedition in the terra incognita where Philip K. Dick blazed trails. It twists and turns, and surprises.

Juice! reminded me of how much the world has changed in the few decades. I had a time travel fantasy about what it would be like to take a copy back to the Sixties, to show it to both the emerging African American Literature audiences and science fiction fans of the time. Their minds would have been blown by this vision of their future.

Come to think of it, a lot modern book consumers would get their minds blown by this vision of their present. Years of corporate publishing, cranking out market-researched bestsellers made not to challenge their off-the-rack identities, has taken it's toll. This is the age of disappearing bookstores and lite reading.

Guess I better go out into the virtual street and make some noise of my own . . . before it's too late.