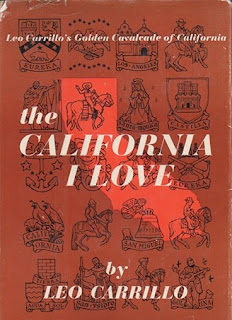 “The vaqueros would drink the blood of the steer to impress the señoritas, and supposedly to add to their manhood.”

Not exactly the sort of things you’d expect from the man who played The Cisco Kid’s sidekick, Pancho.

When I found Leo Carrillo’s The California I Love in the Brass Armadillo antique mall, I knew I’d find it interesting, but I didn’t know that I would love it. But then it’s an intimate, personal account of the state where I was born, that recreated forgotten eras in all their glory.

It has all changed, as Carrillo’s uncle, Don Juan Dana said when asked about Santa Barbara: “No so much fun now, no more bull and bear fights.”

The book is more in the tradition of oral story telling than the Hollywood memoir or the academic history text. “In my family, I never needed the Arabian Nights. We had our own.” And the stories are a California Night’s Entertainment. You can imagine them told over the years at family gatherings over tacos and tamales. They have been polished into legend. “Always I lived amid legends. They were my welcome companions. They formed my finest heritage.”

Carrillo’s family was part of California history. They include a Governor, and a Los Angeles Police Chief, and the author of Two Years Before the Mast.

Some of these stories could be take, and expanded into novels and screenplays. Adventure, romance -- Cisco would be proud.

There’s an epic sweep going from Spanish California, through the invasion by the Americans, into the Twentieth Century, the creation of Hollywood, and finally television and The Cisco Kid. Which was where I came in, a child of Atomic Age and the Wild West.

This is quite different from the California history that most people, even a lot who have come to live in the state, perceive. This is not the plastic paradise, lined with palm trees, populated by blonde, blue-eyed English-speakers who like to surf and meditate. This is the reality, where English wasn’t the dominate language until after World War Two:

“It was perfectly natural for me to pick up the sing-song, sibilant language of the Cantonese and I would find myself at home switching from Spanish to Chinese to English without any conscious effort.”

Later he tells that “When I arrived back in California I discovered that we had been taken over by the gringos.” And he defines “gringos” as “those alleged Californians who make no effort to understand the background or history of the state and who either distrust or are ignorant of Spanish-Mexican culture and tradition.”

To fight against this ignorance, this book needs to be made available again. In a sane world, it would required reading in California schools.

Meanwhile, I imagine Cisco and Pancho patrolling what is now cooking under the smog.