RIP-ROARING ACROSS THE WILD WEST WITH CALIFORNIA JOE 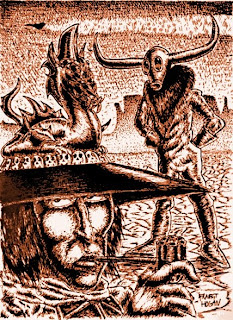 The Wild West is more myth than history. I love the history, but become more fascinated with the myth as I get older, and my memories mutate into something more interesting than the naked truth. We know this myth through Hollywood and television, but had its origins in the pulp fiction that grew out of the legendary dime novel.

For those of you who don’t know what a dime novel was, there’s now a website where you can learn all about them, and even read some excellent examples. They came before the pulp magazine, the comic book, and the paperback.

When I downloaded an ebook of Colonel Prentiss Ingraham’s California Joe, the Mysterious Plainsman, the title had me wondering, just who is this California Joe? With my SoCal upbringing, the name conjures up a guy with a surfboard under his arm. What’s he doing as a Western hero?

And oddly enough, the opening line is: “Who is California Joe?” He possibly was Joseph Milmer, or Hawkings, and rumored to be related to Daniel Boone, but: “Of where he was born, his parents and early boyhood life, he never spoke and died leaving all a mystery behind him.”

He’s a prototype for the quiet stranger, Lone Ranger, Man with No Name, who saves the day, kills the bad guys, and rides off in the sunset. In his wraith-like first appearance, he seems supernatural.

We get right into some rip-roaring action as Joe, the seventeen year-old “border boy,” helps the emigrants (as pioneers were called in those days) rig their circled wagons with dummies to make their numbers look bigger, and fend off Bad Blood and his braves.

When four year-old Little Maddie kisses his cheek, he stays on to fend off he “Injuns,” later burning many of them alive in a cavern full of partially mummified corpses and stealing their horses. To which he soliloquized: “It’s a pity they don’t know English so they can cuss, for I know they is mad to make me sorry for them.”

He sells the ill-gotten horses to the U.S. Calvary, and gives the money to Little Maddie.

Years later, a twelve year-old Maddie needs rescuing and protection from desperadoes named Bowie Bob and Panther Pete. No hint of romance is suggested, but this was first published in 1882. Joe and Maddie eventually get married, which wasn’t considered creepy back in the Victorian Era.

General Custer’s My Life in the Plains is quoted, claiming Joe, “was the man whom, upon a short acquaintance, I decided to appoint as chief of scouts.”

But Joe didn’t die at the Little Big Horn: “California Joe was killed, as was his friend, Wild Bill, by the hand of an assassin.”

But he did live on in later incarnations as countless Western heroes who don’t leave their full names. I have a feeling that we’ll be seeing his ghost on new frontiers, long after the Steampunk Era is over.