SYMPATHY FOR THE APACHE DEVIL 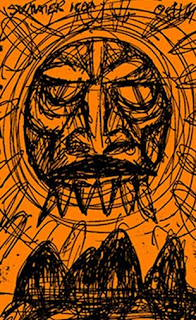 People whose only knowledge of his work are faded memories of Tarzan movies think Edgar Rice Burroughs was a racist and an imperialist.

Before becoming a writer, he was a cowboy who had “gone as long as three weeks on a round up without taking off my boots and stetson,” and was in the 7th U.S. Cavalry in Fort Grant, Arizona, “where I chased Apaches, but never caught up with them.”

He wrote two Apache novels. They are about Shoz-Dijiji, an Arizona Tarzan. His real name, that he never learns, is Andy MacDuff. His parents are attacked and killed by the Apaches, he is taken and raised as one of them.

In the opening line of The War Chief, Burroughs points out that the Scots and the Apaches have things in common:

“Naked but for a G-string, rough sandals, a bit of hide and a buffalo headdress, a savage warrior leaped and danced to the beating of drums.”

This is a Scottish warrior. His lifestyle is praised, “the refining influences of imperial conquest” are condemned.

Shoz-Dijiji takes to being an Apache like a fish to water. Cochise himself forbids anyone to mention the young warrior’s alien origin. He becomes a War Chief, romances an Apache girl, his assimilation seems complete.

The Cavalry is trying to put the Apaches in reservations. Shoz-Dijiji and the young warriors want to fight on. Geronimo sees an unhappy future. Our hero’s Apache sweetheart is killed, he recieves mercy from a Mexican, and meets a white girl, Witchita Billings, who causes conflicted feelings and sympathy for those unlike himself.

Shoz-Dijiji also has non-Apache ideas. He doesn’t like to torture, or mutilate the dead. After seeing Geronimo tricked by translators during some negotiations, he decides that: “The language of the white-eyes can be turned into a weapon against them if we understand it.” Like Burroughs’ other heroes, he has an affinity for learning languages.

Like Tarzan of the Apes, The War Chief ends with a rejection of white civilization. Shoz-Dijiji tells Witchita, “White girl could not love Apache,” and rides off into desert.

In Apache Devil, the defeat of the Apaches is combined with the tragic identity crisis of Shoz-Dijiji. This inverted American immigrant dream of assimilation comes undone. His whiteness is revealed as Geronimo and his people are put on the reservation.

“Once more a Christian nation had exterminated a primitive people who had dared defend their homeland against a greedy and ruthless invader.”

Shoz-Dijiji is forced to create a new identity for himself as a renegade. And with the racial barrier eliminated (“He tried to argue with himself that it was no disgrace to be white.”) he pursues Witchita Billings.

Here Burroughs switches to classic melodrama. Witchita is kidnapped by the villainous rancher “Dirty” Cheetim, who was going to force her to marry him. There is a last minute rescue, and “Dirty” is scalped, staked out, and left to die.

And according to the formula, the audience should be cheering.

People should think twice before calling Burroughs a racist or imperialist.