WAR AND PEACE ON THE ROAD TO BISBEE 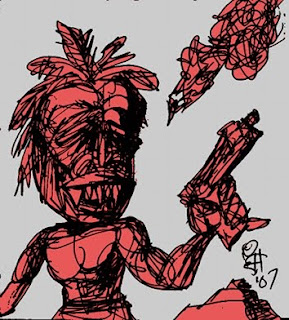 We drove past old hippies who were hitchhiking along Highway 90. They looked like they had been trying to catch a ride since 1974, stuck in a time warp. Overhead, military aircraft patrolled.

On Buffalo Soldier Trail I saw a large SUPPORT OUT TROOPS sign and rambling anti-war signs: SAVE LIVES -- BRING THE TROOPS HOME -- AFGHANISTAN IS A NEVERENDING WAR . . . This trip is taking on a lost counterculture/outback radical tone.

I did notice on our last venture that you run into fewer rednecks on the road these days, even in Arizona. Where did they go? Did UFOs abduct them?

Could these same UFOs be taking away Arizona’s illegal aliens?

Bisbee is like a psychedelic-colored chunk of San Francisco transplanted to the rocky hills just North of the Mexican border, a Wild West post-modern vision of utopia with occasional boarded-up failed businesses. Colorful architectural whimsy snuggled into colorful geological reality and colorful scars of industry past.

In an antique store, while Em was trying on pants, I found Gumbo Ya-Ya, a book I’ve been chasing down for about thirty years. I kept finding it in the bibliographies of books on voodoo. The loas and Tezcatipoca were with us. Bisbee is their kind of town.

Outside, we passed a line of people standing on the sidewalk. At first, I thought they were waiting for a bus. Then I noticed the sign: WOMEN IN BLACK STANDING UP AGAINST THE WAR. They were dressed in black. Some of them appeared to be men. They were blocking the way into the Bank of America -- the closest thing they had to local office of the Mlitary Industrial Complex -- on a Friday night. They flashed the two-finger peace sign. No one seemed to notice them. These things just don’t seem meaningful unless someone is lobbing tear-gas canisters. Just another quaint, local ritual that could become a tourist attraction if it goes on long enough.

In Santiago’s, more aging hippies in tie-dyes and other nostalgic regalia ate Mexican food like it was another decade.

The twisting streets are disorienting. I wouldn’t be surprised if there was a time warp or two. Maybe a mad scientist holed up in a brightly painted shack hanging to the side of the mountain has developed an energy-efficient time machine.

That night at the School House Inn, an actual old school turned into a bed & breakfast, way the hell up in Tombstone Canyon, I read Werewolves of War by Desmond W. Hall, from the February 1931 Astounding Stories on my iTouch. In it, the heroic suicide bomber saves America from invading Slavs by destroying conquered San Francisco with a “flying torpedo” armed with “an adaptation of that discovery of . . . cosmic attraction. Eventually, perhaps, it will permit interplanetary travel.” Nuclear power and suicide bombing predicted in one story. It was an action-packed, rip-snortin’ yarn, too. Just what I needed that night.