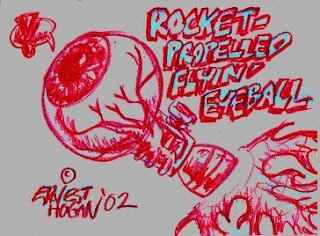 I had a story rejected for being “too surrealistic and cartoony.” That phrase is a good capsule description of my professional life. It also brings me to the touchy subject of just what the hell am I trying to do with myself.

During my childhood in the Dick/Zappa/Cheech/Chong suburbs East of L.A., I adopted science fiction as a strategy for dealing with a forever warping environment. After making friends with the monsters I saw on KHJ Channel Nine’s Strange Tales of Science Fiction, I could deal with hippies, bikers, Jesus freaks, and vegetarians.

But if the going got really rough, and I found myself surrounded by Authority Figures who wanted to restructure my identity for my own good, I had a secret weapon that always sent them heading for cover, the aesthetic nuclear option: Surrealism. Pull out a monster from my id, and those who would lobotomize me, leave me alone.

So, why didn’t I devote myself to surrealism? I’m a working class Chicano. Surrealism, though part of my Hispanic heritage, is a high-brow fine-art thing. My encounters with that world were never satisfying. They didn’t seem to really like surrealism, and I need a way to make a living – I couldn’t afford their pretensions. And there aren’t any commercial outlets for surrealism – less than for science fiction.

And as for that literary relative, magic realism – nobody seems to know what it is, or care, much less make a buck or two off of it.

People see me, don’t understand, and say, “sci-fi.” It’s not as bad as other things I’ve been called.

Now the world of science fiction is in turmoil. The corporate takeover of the last generation is undergoing rapid decay. It’s also clear that all these decades after Star Wars, most people still don’t know what this genre is supposed to be.

Alejandro Jodorowsky started his career trying to be the savior of surrealism, until he realized that he had to go beyond it. If you look at most of what’s called “surrealism” these days, it has little to do the Marxist/Freudian theorizing that started the original movement. And new discoveries about how the brain works show that early Twentieth Century notions about the “subconscious” don’t go far enough.

So, is “science fiction,” as I got to know it fifty years ago, relevant to postmodern life? The environment keeps warping. And people are more afraid of the future than ever before.

Meanwhile, technology continues to make everything more surrealistic and cartoony. My day will come. Soon. When the labels come off, the plastic all melts, and chrome gets too soft.