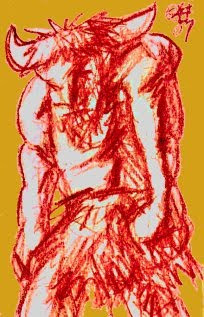 Arrrgh! My usual sources for bullfighting news and video ABC.es and Burladero.com have run short on new stuff. The season is over, the weather is cooling off in the Northern Hemisphere. You need El Sol for a proper bullfight.
. . . though the idea of one taking place in a snow-filled arena, with the bull exhaling clouds of steam as his body heat and blood vaporizes the white powder is appealing. It would have to be a bull designed for a subzero climate. Perhaps with some reconstituted Ice Age bull genes spliced in. This may end up in a story . . .
Luckily, it’s summer in the Southern Hemisphere. A bit of searching had me happily discovering Tauromaquias.com, a Peruvian website that will get me through this winter, when I’m going to have to survive working through the Great Retail Meltdown of 2009. It will be a struggle to stay civilized, and I’m going to need serious diversion to keep my savage mind from running amok.
Not only is there the usual news, photos, and video, but access to complete Peruvian television programs, blogs by both bullfighters and aficionados, and links that will take me months to explore. Oh boy! A portal to another world! It’s like finding a news site direct from Mars!
Already, I’ve discovered Milagros Sanchez the latest female torero, and boy wonder Michelito Lagravere.
Also, South American bullfighting has a different feel from the Spanish. In Spain, it’s all very dignified, with the royal family looking on and preliminary rituals that look like something out of the Middle Ages. In South America, it’s more rough and tumble. In one video, it seemed like it was all the entire torero crew could do to keep the bull from breaking down the arena walls and eviscerating the audience. It’s like classical versus rock and roll.
Not only does this sort of thing get my blood pumping, it makes me forget about the crap I had to participate in during the day: “I was only following orders! I’m only a clerk!”
And it inspires the hell out of me. Some wild science fiction and art will come out of this!
at 3:20 PM