RAW FEED FROM THE BLAST ZONE 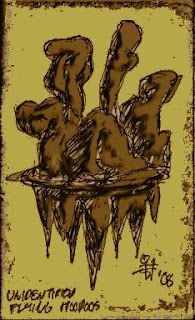 I haven’t posted anything here in a few weeks. I am still alive. Do not believe the rumors that Emily and I were kidnapped by Lemurian terrorists. The Olmec Yakuza had nothing to do with it either. Honest.

It was just another computer meltdown. Nothing special, it’s happening to a lot of people. Em went into detail about it on her blog, so I don’t have to do that here.

So, we’re hurtling into another decade and it’s looking apocalyptic as all hell. The times they are a-changing, my friends. Then, the times are always changing. It’s the nature of the beast, though the Maya would call it a burden.

Rest assured, I’m okay. Em, too. Fangs gleaming, the gods have smiled upon us. We will no longer be bookstore clerks. We have a new computer set up. We have decided to start living the way we want to.

The sacrifices we’ve made are paying off.

The final days in the bookstore biz will be rough, so will dealing with the switch to Mac, but the future looks bright.

Yeah, I know a lot you think this kind of optimism is sick, but a lot the stuff that’s crashing down around us needs to die. New things are being born. By 2020, it will truly be a different world.

Meanwhile, I’m fumbling around, trying to get my new life in order. Soon I’ll be able to tell the inside story of the Bookstore Holocaust, and offer insight into the Publishing Apocalypse. I’ll be taking my nefarious plans off the shelf, dusting them off, and putting them into action.

And then things just hit me. With the new computers, I not only have the facilities for self-publishing, but my own recording and animation studio. As that was sinking in, while I was helping Em get her books for her return to college, I realized that with a little more time and effort, I could get a degree in Archeology or Anthropology . . . I’ve been playing the amateur for years, as a famous wise guy who blew his brains out a few years ago said, “When the going gets weird, the weird turn pro.”

I feel like for the last decade, I’ve been hanging out in querencia, like a bull bristling with banderillas, bleeding, and weary from the fight. Now I feel recharged. Think I’m gonna hold my horns high, rush out, and gore the matador.