CHICANO IS A SCIENCE FICTION STATE OF BEING 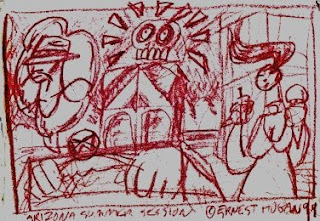 Here I go explaining myself again. It’s what I get for being so complicated. My name is Ernest Hogan, and I write science fiction, and I’m a Chicano. Some of your heads started spinning when you read that.
I have reasons for preferring Chicano to the more popular Latino ( as in “sexy Latino star”) or Hispanic (as in “the suspect is Hispanic”).
Latino is the most globally inclusive term, derived from Latin America, that was coined by the French back when they had dreams of a non-English-speaking New World empire with a French-speaking elite. When you talk about the Latino world, you include Quebec, Haiti, and Brazil.
Hispanic is more specific, dealing with places and people that were touched and transformed by the Spanish Empire. It’s a step up from the days when anyone who spoke Spanish was considered a Mexican. Still it covers the majority of the Americas, and parts of Europe, Africa, and Asia.
So, I call myself a Chicano, even though it was once an insult, very much like “nigger.” It literally means “bastard Mexican.” It was originally what Mexicans called Americanized Mexicans who lived on the wrong side of the border (the American side).
During the Sixties, in imitation of the Black Power movement, it was turned around into a term of pride. It also connects to a place and time. I am a Chicano, therefore I’m from the Southwest of the United States (AKA Aztlán, the Aztec homeland), and lived through the second half of the Twentieth Century. It puts me in both geographical and historical context. And it connects me with the Chichimecas, which is a generic term for the nomadic tribes of Aztlán, who eventually became the Aztecs.
But what about the Irish name? Yeah, I’ve got a cowboy from Cork, Ireland in my family tree. And that actually makes me more, not less Chicano. To be Chicano is to be impure, polluted, a mongrel. Add something to the mix, you become more Chicano.
Which brings me to science fiction and visions of the future.
Have you noticed that if you take someone from India, the Middle East, or anywhere on the tropical zones of the planet where people have brown skin, teach them a little English, dress them in American clothes, put them in an urban environment – they become Chicanos!
When you’re a mixed-up stranger in a mixed-up strange land, you are a Chicano. You don’t need the Spanish language, or a Hispanic heritage, or any Latino connections. You don’t even need brown skin. Hell, you could even have blue eyes!
Here in the Twenty-First Century, globalization is making Chicanos of us all. The interface between you and your world is volatile and unstable – a recombocultural witch’s brew out of which bubbles brave new mutations and abominations. If you want an example, just look into a mirror.
I’ve had half a century’s head start on this. If you need any advice, let me know.
at 10:21 AM