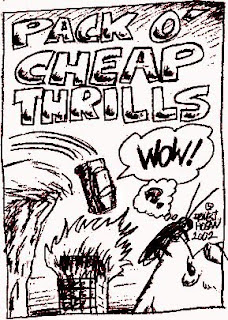 Way back in another millennium, in a magazine called Science Fiction Eye, in an essay called “Guess Who’s Killing the Short Story,” I predicted the end of the short story.
A few years ago, I thought my prediction had come true. It looked like the only people who read short stories started doing it the day after they decided they wanted to write them. And a lot of people were writing stuff along the lines of: The Day I Almost Let My Hair Down – And Thank God I Changed My Mind.
So, why is it now, I’ve sold one short story, have another soon to be podcast, sent off another to a waiting editor, and am finishing still another to another editor?
For those of you who have been taking part in a sensory-deprivation experiment for the last few years, a whole lot of change has gone on. We are witnessing the Apocalypse of the Bookstores, soon we will see the Great Publishers Die-Off, and then it's the End of New York as the Center of the Publishing Universe (in a decade or so, that city will only be known as an Atlantis-like fable).
Of course, this will be hard on writers, but then we’re always swimming neck-deep in inky, candiru-infested waters. I feel sorry for my colleagues who were doing well in the last decade. But then, as Henry Cabot Henhouse III said, “You knew the job was dangerous when you took it, Fred!”
So, how is it that I’m suddenly doing a ridiculous amount of short story biz, amid all this turmoil?
Shortly after writing the “Killing” essay I really did try to give up writing short stories. Then I was unable to interest publishers in my novels, since Sci-Fi as Nerd Lit had become the official policy. When I decided to try again, I no longer thought of them as Literary Art, but Entertainment Modules.
Then the landscape shifted. New media and corporate collapse are bringing about the end of publishing as we knew it – and actually, it’s not a bad thing. For those of you who haven’t been struggling with the business, it’s sucked for a long time. There are no good old days here. It’s never been a good time to be a writer.
And with the shifts and upheavals, a new world is forming. People want entertainment that is an alternative to the corporate megaproductions, stuff that comes at them through cracks from the emerging society. Places are popping up where I can sell and promote my wacky Entertainment Modules.
And in the world of texting and e-mail, the skills of a writer (and artist), honed over some hard decades, come in handy.
It all makes me feel more like a professional and less like a guy with a bizarre addiction that he’s disguising as a hobby. And if more money starts coming in – look out.
at 2:13 PM