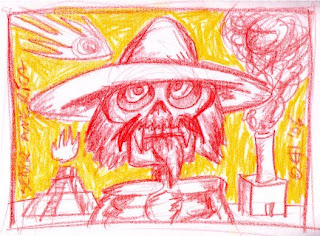 For a supposedly hot-shot science fiction writer who keeps getting thrown into the "cyberpunk" subcategory, I have a lot of problems adjusting to new technologies. I can’t work with computers without uttering profanity, or at least talking to myself. I was pulled into the Information Age kicking and screaming all the way.

I don’t know why. Maybe it’s the dyslexia. Maybe it’s my tendencies toward primitivism. Or that fact that I just tend not to fit in.

Anyway, I struggle with new technologies. The results are often amusing. That’s why I document them. We could all use the laughs.

A few weeks ago, I blogged about Guillermo Gómez-Peña, and found that when I pasted it into Blogger, there was a blank space. I tried cutting and pasting from WordPerfect, but it didn’t work. I was frustrated, but struggled on.

A few days ago, I was blogging about Alejandro Jodorowsky, and felt the need to mention Luis Buñuel. Oh no! The dreaded ñ problema! Just out of pure optimism, I tried cutting and pasting – and it worked!

I rejoiced, started an early version of this post, but the ñ wouldn’t paste in! I went to work, and did a lot of talking to myself. I tried not to think about it.

It’s like Tezcatlipoca was living in my computer, messing with me, putting me in a weakened state in which he could hijack my body for a diabolical joyride. If I hadn’t already written that book, I’d be making notes.

On the way home, it hit me: This isn’t a word processing problem, it’s an HTML problem. I should look in Blogger’s HTML mode, make note of the code, and use that in the future.

I was thinking that if I could just figure out how to do the inverted exclamation point, and even the question mark, I would be un muchacho alegre, as the old corrido goes . . .

So another day later, I started to work at the laptop, poked around in the Insert box in WordPrefect, and there, in the Typographic Symbols set, was my old friend ¡ and next to it was ¿